The Mid City West Community Council’s executive board on Dec. 12 supported plans for a mixed-use housing and commercial project proposed at 8000 Beverly Blvd.

The council’s planning and land use committee had previously endorsed a smaller, five-story building at the site, but the executive board overruled that decision and supported a six-story project to bring more affordable housing to the community. 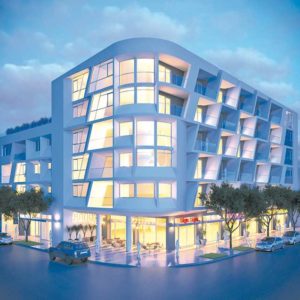 An larger version of the proposed project at 8000 Beverly Blvd. was recently approved by the Mid City West Community Council. (photo courtesy of PLUSARCH. INC.)

The project by Beverly Pacifica LLC calls for 58 units, including six units for very low-income tenants and two units for those with moderate incomes. It will also have 7,400 square feet of ground floor commercial space.

The project will replace a one-story building that was formerly used as offices for SBE Entertainment and has most recently been used as studio and office space. Mid City West board members had asked the developer to include more affordable housing at the site.

“8000 Beverly Blvd is a smart and well-designed mixed income and mixed-use development that will add net new housing without displacing residents,” said Mid City West Chair Scott Epstein. “I’m proud that advocacy on the part of Mid City West board members led to an increase of four affordable units and six market rate units to the project. These extra units will help address Mid City West’s housing crunch and give families of different income levels the opportunity to live in and contribute to our vibrant community. I’m also pleased that the [developer] has agreed to help fund an enhanced crosswalk or signal at the corner of Beverly and Edinburgh, which will make crossing Beverly Boulevard by foot or bike much safer.”

Ira Handelman, a consultant representing the project, said the developer is looking forward to consideration by the Los Angeles City Council.

“The developer is pleased with the support and worked with the neighborhood council and the community,” Handelman said. “It meets two important needs, one for affordable housing and the other for market-rate housing.”

According to the project description, it would have two levels of subterranean parking with 84 spaces and 61 bicycle parking spaces. Los Angeles City Councilman Paul Koretz, 5th District, said he is optimistic about the development.

“I am supportive of much needed affordable and market rate housing in my district and I understand that the neighborhood council has supported the new development at 8000 Beverly and I support the decision they have made,” Koretz said.