Pink’s Hot Dogs has been a Los Angeles icon since 1939. The hot dog stand may now become even more of a landmark under a plan to designate the intersection of La Brea and Melrose avenues as Pink’s Square. 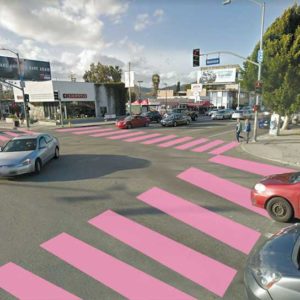 The Mid City West Community Council created a rendering showing how the pink crosswalks may be configured at Melrose and La Brea avenues, near Pink’s Hot dogs. (photo courtesy of Mehmet Berker)

The idea was originated by the owners of the iconic stand – Richard Pink, his wife Gloria and sister Beverly – and has already gained support in the community. The Mid City West Community Council endorsed the idea of designating Pink’s Square, and wants to install pink continental crosswalks.

“The board was very excited,” said Scott Epstein, chair of Mid City West. “The idea is to do the continental crosswalks you see across the city, and instead of doing them in white, do them in pink. It gives it a sense of place, and anytime you do something like that, drivers are more careful and the crosswalk will be safer.”

Epstein cited West Hollywood’s rainbow crosswalks at San Vicente and Santa Monica boulevards as an example of something similar, and added that Santa Monica has painted crosswalks in two locations.

“We felt it was great synergy, a way to do two things at once,” Epstein added.

Richard Pink is also excited about the prospect of pink crosswalks, as well as establishing Pink’s Square.

“I think it would be a real enhancement. Why not bring the intersection to life?” Pink said. “I think it makes the city more interesting. It brings a lot more excitement to that intersection, which is really a crossroads of Los Angeles.”

Councilman Paul Koretz, 5th District, said he likes the concept but is waiting for Pink’s to generate more support before the City Council considers the idea.

“I think recognizing the legacy in a creative way is very appropriate,” Koretz said. “If you are going to go pink, that’s where you want to do it.”

After being endorsed by Mid City West, Pink will present the plan to the Greater Wilshire Neighborhood Council.

“I imagine it will be well received,” said Owen Smith, president of the Greater Wilshire Neighborhood Council. “As far as I’m concerned, it’s one of the iconic L.A. places. Who hasn’t been to Pink’s?”

Pink’s Hot Dogs is celebrating its 78th anniversary since Paul and Betty Pink started with a pushcart near the intersection. People line up daily outside the stand to order their favorites, like the classic chili dog.

Pink’s clientele includes many Hollywood celebrities, and the walls inside the stand’s dining area are covered with autographed photographs. The menu includes hot dogs named after celebrity guests such as Emeril Legasse, Martha Stewart, Huell Howser and Giada De Laurentiis.

Pink’s is also a destination for visitors from around the world. Austin Rawcliffe, of Manchester, England, stopped by Pink’s on Tuesday during a trip to Los Angeles.

“I’ve never eaten one. It lives up to its reputation,” said Rawcliffe, who added that he liked the idea of creating Pink’s Square. “So much in the world is closing or moving out. It’s important to remember the past.”