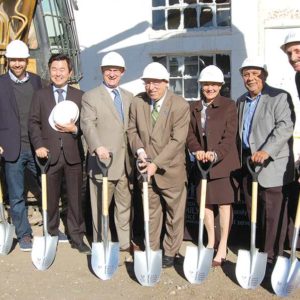 The center is expected to be completed near the end of 2019 and will serve as JFS’ headquarters, as well as a multipurpose facility for the community. The new facility will replace the Freda Mohr Multipurpose Center and Hirsh Family Kosher Kitchen buildings. JFS temporarily moved programs at those locations to a building at 6310 S. San Vicente Blvd., Ste. 275, until construction is complete. All of the services previously provided at the Freda Mohr Center and the Hirsh Family Kosher Kitchen will be continued at the Gunther Center.

The new center will have 28,341 square feet of space, including a fitness center and dining room. The new facility will house mental health services, support services for Holocaust survivors including Café Europa, counseling for victims of intimate partner violence, and an expansion of JFS’ older adult Health and Wellness Center.

Koretz said he is proud the new facility will bring more services to the local community.

“Throughout its amazing 163-year history, Jewish Family Service of Los Angeles has been a beacon of hope for those in need, regardless of their background,” Koretz said. “This organization contributes so much to our community, from feeding those who are hungry to providing a refuge for victims of domestic violence, and caring for the physical and mental health or our seniors. JFS delivers more than just programming, what they offer their clients are dignity, meaning and joy. For example, the Hirsh kosher café combats more than hunger. It provides a comfortable space to be social and to calm the pain of loneliness as well. JFS’ Freda Mohr Center has long been a place to nourish the mind, body and soul. It serves more than a thousand clients per month. This new center will increase JFS’ ability to serve the most vulnerable in our community.”

Feuer also spoke positively about JFS’ work and the center, and thanked philanthropists Lois and Richard Gunther for their contributions. He recounted a story from years ago when his son accompanied him in serving Thanksgiving meals for JFS to people in need, and distributed pennies he had collected to help them. Feuer said his son asked, “Dad, we’ll deliver meals to these people tomorrow. What will they do the next day?”

“Lois and Dick are answering that question. Because by bringing forward through their philanthropy this marvelous building, we know what JFS’s clients will do the next day, and the day after that and the day after that,” Feuer said. “It is so fitting that this building will have your names on it because generations of people here in Los Angeles, people in need and people who want to be involved in philanthropy and social service, will know this is your legacy.”

Former presidents of the JFS board of directors David Levine and Dena Schechter also spoke. Levine said the new facility will continue JFS’ mission of providing services and will be a center for all people in the community.

“Much like the dynamic city we call home, Jewish Family Service has grown and evolved since its founding in 1854. It adapted to meet the changing needs of our changing community,” Levine said. “Over the past 15 years alone, our client base has grown, unfortunately, exponentially, and the needs of those clients have also grown more complex. We are stretching beyond our capacity to serve everyone who comes through our doors with the dignity and respect they deserve. We have rededicated ourselves to feeding, supporting, connecting and protecting our neighbors.”

The Freda Mohr Multipurpose Center has been located on Fairfax Avenue since the early 1950s. It is named after the first executive director of JFS. The project is funded through donations to a capital campaign.