For the fourth consecutive year, Immaculate Heart High School hosted an Hour of Code event to encourage students to develop an interest in computer science. 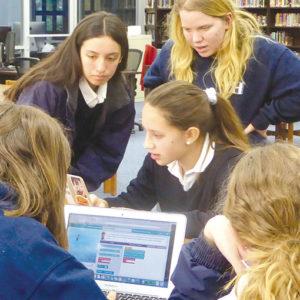 During the event, students from all grades and all skill levels worked on coding projects using programming languages such as Python, JavaScript and CSS. Working individually, students created games, solved puzzles and tested their analytical thinking skills. The activities were provided by code.org, a nonprofit organization dedicated to making computer science more accessible to people who are underrepresented in the field, particularly women.

The event has grown considerably at Immaculate Heart since its beginning. Four years ago, not many students understood the appeal of coding, which they thought of as solitary activity. There were also a limited number of laptops available for interested students to borrow, and the school’s internet network could only support a relatively small amount of traffic.

Now, all students have a school-issued laptop and the network has been upgraded, allowing more students to access the internet at the same time. The computer science department has also expanded, and more students are discovering the fun of designing apps, websites and games with code.

“It was really cool to see students, who were maybe a little reluctant to try the activities at first, get so into their projects,” said junior Kira Toal, a Tech Team member. “A lot of them actually stayed into lunch to finish what they were working on.”

The Tech Team is already planning next year’s Hour of Code event and is excited to take on an even larger role. Members want computer science classes to design the activities students will participate in, making the event almost completely student created and operated.

“I love the idea,” said Megan Reeves, computer science chairwoman. “I think it would be great to have the students take even more ownership next year.”

Immaculate Heart is an all-girls Catholic school founded in 1906 at the corner of Western and Franklin Avenues. For information, call (323)461-3651, or visit immaculateheart.org.