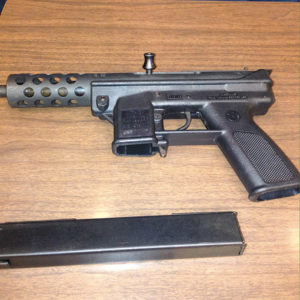 The defendants is accused of having an unsecured Tech-9 firearm in the residence where children also live. (photo courtesy of the Los Angles City Attorney’s Office)

The allegedly unsecured weapon was discovered by law enforcement after the man’s teenage son is alleged to have brought an unloaded handgun to school.

“Locking up guns saves lives, prevents crime, and it’s the law,” Feuer said. “Unsecured firearms are a major source of crime guns in Los Angeles, so we’re holding gun owners accountable for safely and lawfully locking them up.”

Jaime Sanchez, 54, was charged with two criminal counts of possession of an assault weapon and unlawful storage of a firearm. The maximum penalty is 18 months in jail and a $1,000 fine. Arraignment is scheduled for Jan. 16.

In November, Sanchez’s 15-year-old son allegedly was found by school officials at Washington High School to be in possession of a 9 mm semi-automatic handgun. Responding officers were told there were other weapons at the student’s home, where four minors live. Investigating officers were given permission by Sanchez to search the home and were directed to a plastic gun case in a bedroom closet.

Inside the unlocked gun case, officers allegedly found an unsecured and unloaded Tec-9 assault weapon with a separate 30-round large capacity magazine. The assault weapon was allegedly not properly registered. Officers also allegedly discovered a partially secured and unloaded .380-caliber semi-automatic handgun, as well as five pounds of loose ammunition inside the gun case. More than 50 rounds of 9 mm ammunition were also allegedly recovered from a separate closet. All weapons and ammunition were confiscated by law enforcement. Deputy City Attorney Margie Barron is prosecuting the case.