Family, friends and longtime customers are mourning Gary Canter, of Canter’s Deli on Fairfax Avenue, who died on Dec. 26 at the age of 58.

Canter died unexpectedly of a heart attack while sleeping at approximately 7 p.m. at his home in the 400 block of S. Highland Avenue. Marc Canter said his brother had not been feeling well, but everyone thought it was a cold or flu. When he was 40, Gary Canter underwent triple bypass surgery. 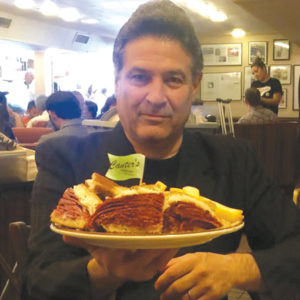 “He had a strong will,” Canter said. “He had the triple bypass surgery and here we are 18 years later. The way I look at it is we got another 18 years with him.”

“He was a great man, cream of the crop,” Canter said. “He was very funny, always laughing. He always gave money to strangers. He even tipped before the check came.”

The family posted a tribute to Canter on the deli’s Facebook page.

“Gary loved his family’s delicatessen business and had tremendous pride for his grandparents and carrying on their legacy,” the post read. “He died from an apparent heart attack and is left behind by his parents, brother, sister, wife, daughter, nieces, nephews and cousins. He loved everyone and could bring a smile and laughter to all he met. R.I.P Buddy Buddy! You will be missed by all that knew you!”

“We are deeply saddened by the sudden passing of our beloved partner Gary Canter,” read a Facebook post by Canter’s Deli Las Vegas. “We’d like to extend our heartfelt condolences to our brothers and sisters at the Original Canter’s in L.A. It was Gary’s passion, expertise and charisma that greatly contributed to Canter’s Las Vegas’ success. He was irreplaceable to us, to his family and friends, and to everyone he encountered. He will always hold a tender space in our hearts.”

“Sad to see Gary Canter pass away so soon,” said Councilman David Ryu, 4th District, via Twitter. “Canter’s is an institution on Fairfax Avenue in L.A. and has served this city well for decades. Thoughts are with the family.”

“Our thoughts are with our longtime dear friends at the Los Angeles institution Canter’s Deli during this difficult and very sad time,” Feuer said.