Celebrate 2018 with the Postmodern Jukebox at Disney Concert Hall

Ring in the new year with style and sophistication as Scott Bradlee’s Postmodern Jukebox delivers a twist on modern pop hits in the styles of jazz, ragtime, swing and more at the Walt Disney Concert Hall on Dec. 31. 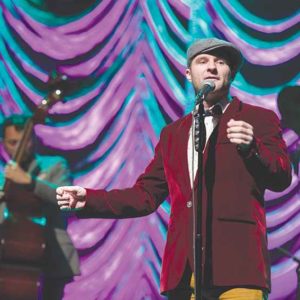 Created by Bradlee, the rotating collective of Postmodern Jukebox has spent the past few years amassing more than 750 million YouTube views, 2.7 million subscribers and more than 1 million likes on Facebook. They have performed on “Good Morning America,” topped iTunes and Billboard charts, and played hundreds of shows to crowds around the world.

In one such remake, Bradlee and the Postmodern Jukebox turned Miley Cyrus’ “We Can’t Stop” into a doo-wop ditty that’s garnered over 17.4 million views. In 2015, they envisioned Radiohead’s alt-rock hit “Creep” as a torch-like ballad that’s racked up over 36 million views and was named one of the “9 Best Viral Cover Videos of 2015” by People Magazine.

The show is part of the LA Phil’s “Deck the Hall” series featuring performances by an eclectic array of artists who bring the joy of the holiday season to concert-goers of all ages during this time of year. The holiday series culminates with this New Year’s Eve celebration, featuring Scott Bradlee’s Postmodern Jukebox, for two shows only on Dec. 31, at 7 p.m. and 10:30 p.m.

People and issues that defined 2017