In its continued efforts to encourage and train top swimmers, the Burbank-Los Angeles Swim Team, known as BLAST, has bolstered its list of highly accomplished and certified coaches with the addition of the youthful and talented Jesse Novak. 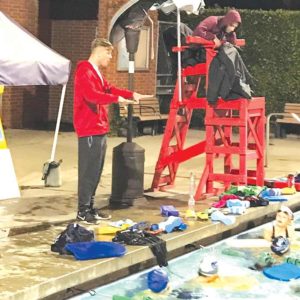 Novak attended Rowan University in his home state of New Jersey, where he earned a degree in health promotion and wellness management, and coached in the university’s technique clinic. But while he studied the science of coaching, Novak also continued to excel as a competitive swimmer. As a student, he was a three-time National Collegiate Athletic Association Division III champion and the New Jersey Athletic Conference’s Swimmer of the Year for 2016 and 2017. He even competed at the 2016 Olympic trials.

After graduating from college in spring 2017, Novak spent the summer coaching the Somerset Valley YMCA swim team in Bridgewater, New Jersey. Then, just a few months ago, Novak moved to Los Angeles, where BLAST hired him to serve as the coach for their programs at the West Hollywood Pool.

In his new position with BLAST, Novak, 22, coaches 25 swimmers, ages 11 to 16, in the four main strokes – butterfly, breast stroke, backstroke and freestyle.

“Swimming is just a sport where you get out of it what you put into it,” Novak said of his coaching philosophy.

The young athletes of BLAST aren’t the only ones learning with the swim program. Novak is still learning and looks at each of his coaching jobs “like internships in a way.” He finds opportunities where he can observe and try new coaching techniques with swimmers.

As for his own career, Novak hasn’t given up competitive swimming just yet. He recently participated in the USA Swimming National Championships in November, placing eighth in the 100-meter freestyle meet and 11th in the 50-meter freestyle. He also continues to train for the Olympic trials in 2020.

Novak’s zeal for swimming has not only propelled him up the rankings, but it has also sparked a passion within his students, according to Peter Lambert, the director and head coach at BLAST. Lambert, like Novak now, was a standout swimmer when he competed, qualifying for the USA Nationals multiple times.

“Jesse is super enthusiastic. He loves the sport, and it’s contagious to everyone around him,” Lambert said. “He can lead by example.”

The director said the swimmers under Novak’s tutelage have been “more competitive” and “more enthusiastic” in the short two months since the young coach has joined the swim program. Novak added one of his swimmers had dropped 10 seconds in her time in the 200-meter freestyle – a huge improvement in a sport where the winner can be determined by a matter of milliseconds.

It isn’t all about times and rankings for Novak though. He always makes sure his swimmers are enjoying themselves and the sport as well.

“The kids have been a blast – no pun intended,” Novak said. “They are having a good time, and that’s what really matters.”