The Los Angeles County Sheriff’s Department has announced the results of a specialized drug enforcement team combatting the heroin and opioid epidemic. 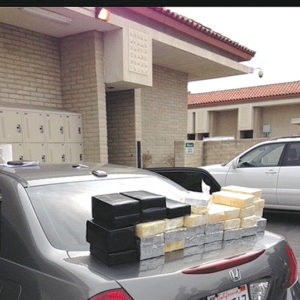 Sheriff’s department authorities displayed drugs that were seized as part of an effort to combat heroin and opioid trafficking. (photo courtesy of the LASD)

Since 2012, the LASD Domestic Highway Enforcement Team has been dedicated to disrupting the operations of cartels transporting drugs from Mexico into Los Angeles County, and to northern California, Oregon, Washington and Canada. During an initial three-month pilot program, illegal narcotics with an estimated street value of $8.14 million were seized. Afterwards, a full-time Domestic Highway Enforcement Team was formed along with the Federal Bureau of Investigation and the U.S. Drug Enforcement Agency to combat the national criminal drug trade enterprise.

“The drug epidemic involving heroin, fentanyl and other illicit substances is ever-present and is directly reaching into our neighborhoods and schools in areas throughout Los Angeles County,” Sheriff Jim McDonnell said. “It is destroying families, cutting young susceptible lives short and causing irreparable harm to our peaceful and productive society. We must all work collaboratively to attack this problem from every possible angle and on every conceivable level.”

During recent months, the Domestic Highway Enforcement Team has seen an alarming uptick in crimes related to the interstate drug trade, including an increase in the amount of fentanyl seized. The synthetic drug is similar to heroin but less expensive to purchase. The department estimates that the heroin and opioid epidemic results in the deaths of 160 people per day throughout the nation.

Fentanyl is manufactured and sold by the drug cartels for the purpose of causing addiction much faster, which creates more of a demand for narcotics such as heroin. In 2017, the team seized approximately 19 pounds packaged fentanyl in its pure form.