Authorities continue to investigate blast near Hollywood and Highland

Law enforcement and fire department authorities are investigating the cause of a suspected natural gas explosion on Dec. 20 in a vacant commercial space on the ground-floor of an apartment building at 1724 N. Highland Ave.

The explosion occurred at approximately 7:30 p.m. in a space that formerly housed the Tinhorn Flats Saloon and Grill. No one was inside the restaurant space at the time of the explosion, which shattered glass on the facade. 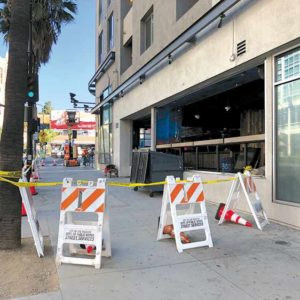 The storefront is across the street from the Hollywood and Highland shopping complex in a six-story apartment building. Police and firefighters arrived shortly after the explosion and cordoned off the building. Residents of apartments on the floor above the former restaurant were evacuated, and were allowed to return later the same evening after the gas was shut off and the building was determined to be safe.

On Dec. 27, Stewart said the incident is still under investigation. She declined to comment further on the cause of the explosion.