Six years after a serial arsonist caused damage and spread fear throughout Hollywood and West Hollywood over the New Year’s weekend by starting nearly 50 fires, the man convicted of the arson spree is scheduled to undergo a new trial to determine whether he was sane at the time. 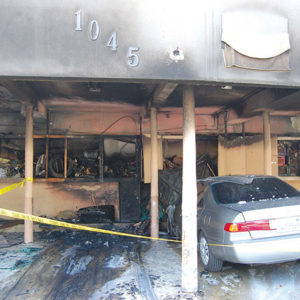 Harry Burkhart was convicted of starting fires in carports in Hollywood and West Hollywood six years ago. (photo by Edwin Folven)

Harry Burkhart, 30, was convicted in 2016 of 25 counts of arson of property, 18 counts of arson of an inhabited dwelling and two counts each of possession of an incendiary device, attempted arson and arson of a structure. He primarily started the fires in carports and subterranean garages at apartment buildings in the Hollywood and West Hollywood areas, but also struck in the San Fernando Valley. The crimes occurred from Dec. 29, 2011 to Jan. 2, 2012, when a reserve deputy from the West Hollywood Sheriff’s Station pulled over and arrested Burkhart near Sunset Boulevard and Fairfax Avenue. Burkhart, a German national, has been in custody ever since.

Shortly after his conviction in 2016, a jury deadlocked in the sanity phase and a mistrial was declared. Eight jurors believed Burkhart was sane, while four believed he was insane.

Pre-trial proceedings for a new sanity phase began in mid-December. An additional pre-trial hearing is scheduled on Jan. 4 in Department 107 of the Los Angeles Superior Court, downtown.

Defense attorneys argued previously that Burkhart suffers from mental illness. Prosecutors alleged Burkhart embarked on the arson spree in retaliation after his mother, Dorothee, was arrested and deported to face prosecution for crimes she allegedly committed in Germany. Burkhart and his mother lived in an apartment on Sunset Boulevard, just east of West Hollywood.

At the time of his arrest, authorities found materials for starting fires in a minivan Burkhart was driving. Most of the fires were started by incendiary materials thrown under vehicles parked in ground-level carports. Los Angeles County District Attorney’s Office spokesman Ricardo Santiago had no timeline for how long the retrial of sanity phase will last.