The 129th annual Rose Parade will travel along Colorado Boulevard in Pasadena on Jan. 1, and for the seventh consecutive year, the AIDS Healthcare Foundation will have an entry, with a float titled “Keeping the Promise.” 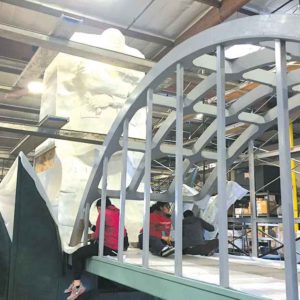 AIDS Healthcare Foundation’s “Keeping the Promise” float is being decorated in the days leading up to the Rose Parade. The float pays tribute to Dr. Martin Luther King Jr. and features an artwork depicting the civil rights leader. (photos by Ged Kenslea/courtesy of AHF)

The float is dedicated to the memory of Dr. Martin Luther King Jr., commemorating his death 50 years ago in 1968. It will also honor civil rights activist Heather D. Heyer, who died in August when she was struck by a vehicle driven by an alleged white supremacist during a violent protest in Charlottesville, Virginia. Heyer’s mother, Susan Bro, will ride on the float along with Alfred Wilson, an attorney at the firm where Heyer worked and co-founder of the Heather Heyer Foundation.

“My daughter Heather stood bravely for unity and against hate and always believed in dialogue and discussion as the keys to peace,” said Bro, who with Wilson co-founded the foundation named after her daughter. “We are honored to continue Heather’s legacy by partnering with the AIDS Healthcare Foundation and encouraging young people across the country to promote peace.”

Additional riders on the float include two winners of a youth essay contest that asked the question, “What are you doing to stand against hate in your community?” The riders are Lilia Sweet “Sweet Lily” King, a 17-year old from Tallahassee, Florida, whose essay focused on her “Longest Table” project to build community cohesion; and Kibiriti Majuto, a 19-year old born in the Democratic Republic of Congo now residing in Charlottesville, whose essay focused on his participation on the board at the Charlottesville Center for Peace & Justice, and other civic work.

They will be joined by Cynthia Davis, chair of AHF’s board of directors, and assistant professor and program director at Charles R. Drew University of Medicine and Science. She was instrumental in the development in 1991 of the first mobile HIV testing project in Los Angeles County. Additionally, Rev. Kelvin Sauls, an AHF board member and senior pastor at Holman United Methodist Church in West Adams District, will be aboard the float on New Year’s Day. 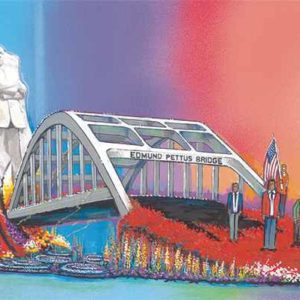 A rendering shows how AIDS Healthcare Foundation’s “Keeping the Promise” float will appear when it travels along Colorado Boulevard in the Rose Parade on Jan. 1.

Ged Kenslea, senior director of communications for AHF, said the organization is proud to have been involved in the parade over the last seven years. The “Keeping the Promise” float coincides with this year’s Rose Parade theme of “Making a Difference.”

“It’s a global platform. There are 35 million viewers in the U.S. and 28 million to 29 million viewers worldwide,” Kenslea said about the Rose Parade. “The plan was to commemorate the life of Dr. Martin Luther King, but some of what he was trying to do has been left undone. There are still promises to be kept.”

Kenslea referred to how HIV and AIDS disproportionately affect people of color as one of the unresolved issues related to the epidemic. The float reaffirms AHF’s commitment to helping people affected by the disease around the world, as well as improving civil rights, he said.

Kenslea also mentioned three other young people who were winners of the essay contest but were unable to visit Southern California to ride on the float. They are Aleena Haidari, a 17-year-old born in Pakistan who now lives in Charlottesville; Amaya Wallace, a 16-year-old from Charlottesville; and Brianna Parker, a 16-year old from Columbia, Virginia.

“We are recognizing potential future leaders who are standing up to hatred, bigotry, stigma and racism,” Kenslea added. “This float encapsulates that spirit. It’s a lifelong mission, [a promise] we collectively need to work together to keep.”

The Rose Parade begins at 8 a.m. on Jan. 1 near the intersection of Orange Grove and Colorado boulevards in Pasadena.

The AHF’s entry is one of 39 floats in the parade, which also features marching bands, equestrian troops and entertainers.

Actor and philanthropist Gary Sinise will be the grand marshal for 129th annual Rose Parade.

Authorities continue to investigate blast near Hollywood and Highland