Academy Museum’s board of trustees meet

As the calendar turns to 2018, the Academy Museum of Motion Pictures’ newly completed board of trustees has already begun looking ahead to 2019, when the newest Miracle Mile museum is scheduled to open.

“The Academy Museum has already made great strides in raising funds, constructing the site, and developing the exhibition plans that will make this museum an essential destination for visitors and locals who love film,” said Ron Meyer, chair of the board, in a statement. “Now, with the formation of this board of trustees, we have real momentum. I couldn’t be more pleased by the talent we’ve gathered to oversee this great new institution.” 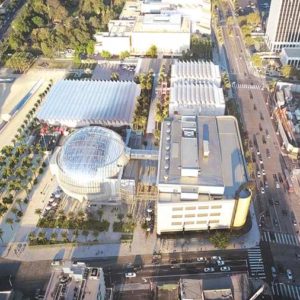 A rendering shows what the completed museum, located at the intersection of Wilshire Boulevard and Fairfax Avenue, will look like. (photo courtesy of the Academy of Motion Picture Arts and Sciences)

Meyer, vice chairman of NBCUniversal, led the inaugural meeting of the 12-member board of trustees on Dec. 4. Among the board’s responsibilities will be overseeing the museum’s strategic vision and maintaining its finances.

“The leaders who have joined together as the Academy Museum’s trustees are among the most respected and influential figures in the world of motion pictures and philanthropy,” said Kerry Brougher, director of the Academy Museum. “Their caliber speaks volumes about the level of achievement this museum aspires to attain. All of us who have been working to build this institution are immensely grateful to them for stepping forward to assume board responsibility as we move toward our grand opening in 2019.”

Brougher has said that she wants the museum to convey the power of movies, to give viewers a look behind the scenes into how movies are made, and to explore movies’ impact on culture and people’s lives.

Plans for the museum, under construction at Wilshire Boulevard and Fairfax Avenue, were initiated by the board of governors of the Academy of Motion Picture Arts and Sciences. The 300,000-square-foot facility was designed by Pritzker Prize-winning architect Renzo Piano. The museum will comprise two buildings: The May Company Building, to be renamed the Saban Building, and a spherical structure with a 1,000-seat theater and terrace topped with a glass dome.

A campaign to raise funds for the museum’s construction, opening exhibitions and programs reached approximately 80 percent of its $388 million goal earlier this month. The project also received a boost in the fall through a $50 million donation from philanthropists Cheryl and Haim Saban. Haim Saban, an entertainment industry leader, is best known for introducing the U.S. to the “Mighty Morphin Power Rangers.” Cheryl Saban, a psychologist and author, once served as a presidential appointee as a United Nations delegate for the 67th General Assembly.

Speaking at the museum in September, Los Angeles Mayor Eric Garcetti said the Academy Museum will add another world-class institution to the city’s cultural landscape.

“People from across the globe come to Los Angeles to be inspired, and to see things they have only imagined become real through storytelling,” Garcetti said. “It is only fitting that the filmmaking capital of the world will soon have a space dedicated to its industry and artistry.”

Lay down the L.A. laws