Wolf Blitzer honored by L.A. Museum of the Holocaust

Wolf Blitzer, CNN Lead Political Anchor and Host of CNN’s “The Situation Room” was honored by Los Angeles Museum of the Holocaust at its annual gala, “Preserve the Legacy, Shape the Future,” on Nov. 5 at the Beverly Wilshire Hotel.

Blitzer was born in Germany to Holocaust survivors Cesia and David Blitzer. In 2014, when he participated in CNN’s “Roots” program, he learned during a visit to Yad Vashem that his paternal grandparents died in Auschwitz-Birkenau. In 2015, he hosted the CNN documentary “Voices of Auschwitz,” which profiled four survivors. 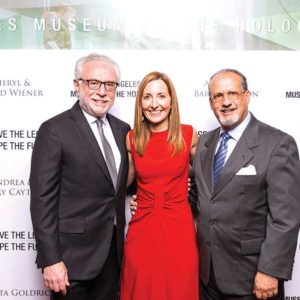 The gala, attended by more than 700 people, including 74 Holocaust survivors, featured a special preview of the museum’s new virtual reality project, an educational tool using cutting-edge technology to present Holocaust survivor testimonies in an engaging and interactive way for generations to come.

In addition to Blitzer and Rivers, Beverly Hills Mayor Lili Bosse spoke about her experience as the daughter of Holocaust survivors.