With an estimated attendance of several hundred thousand people, the Halloween Carnaval is the world’s largest Halloween festivity. Akin to Times Square in New York City on New Year’s Eve, it is one of Southern California’s largest events of any kind. 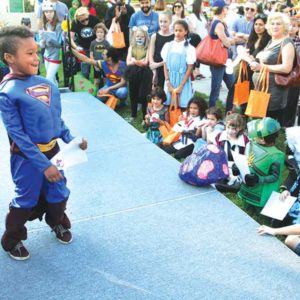 The Youth Halloween Carnival was part of the annual festivities in West Hollywood. (photo courtesy of the city of West Hollywood)

Rooted in the foundation of West Hollywood’s diverse culture and community, the Halloween Carnaval was launched in 1987 and has grown into a world-famous annual gathering of phenomenal costumes, entertainment, culture and self-expression.

The festivities included the crowning of Jake DuPree, also known as Glitter Fantasy, as the Queen of the West Hollywood Halloween Carnaval. In addition to his work with Cosmopolitan.com, DuPree is a host and fitness personality for “Pop Sugar Fitness,” “The Doctors,” and “Clevver.” He is a member of the Actor’s Equity Association and a fitness instructor. DuPree supports The Trevor Project and the Born This Way Foundation.

For information, visit weho.org and view social media posts under #wehohalloween for photos, videos and other media uploaded by attendees.

Pizza, pasta and a whole lot more at Numero Uno