Every year during the holiday season, West Hollywood Councilman John Duran’s home decorating includes 12 teddy bears, each representing a friend he lost at the height of the HIV/AIDS epidemic.

Adding a solemn note to a celebratory time of year, World AIDS Day returns on Dec. 1 to remember the lives taken by the virus and to support those living with it. 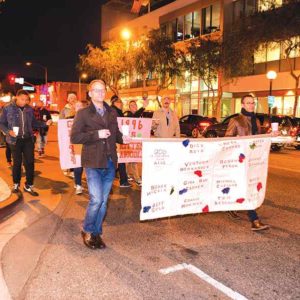 Participants in a West Hollywood candlelight vigil will walk to the library to continue their World AIDS Day remembrance, as they did in 2016. (photo courtesy of the city of West Hollywood)

“It’s a very emotional time every year,” said Duran, who lost more than 100 friends when the epidemic devastated West Hollywood. “Many of us in West Hollywood lost so many people.”

West Hollywood’s World AIDS Day events this year will include a candlelight vigil at 6 p.m. on Friday, starting at the northwest corner of Crescent Heights and Santa Monica boulevards, and ending at the West Hollywood Library. Then, the Paul Starke Warrior Awards program will be held at 7 p.m., recognizing service providers who help people living with HIV/AIDS. Laurie McBride, an LGBTQ activist and former California assistant secretary of state, will speak. The event is free and open to the public.

Duran, who is HIV positive, said he’s asked Holocaust survivors how they’ve coped with losing loved ones, and always gets the same answer: “You never get past it. The best thing to do is remember them.”

Approximately 60,000 people live with HIV in Los Angeles County, according to the County of Los Angeles Public Health Department. An estimated 14 percent of them don’t know they are infected.

The overall rate of transmission has decreased throughout the county, but certain segments of the population have continued to face a higher risk. According to the county Public Health Department, the number of people diagnosed with HIV decreased 37 percent between 2002 and 2013. Black males, however, were diagnosed with HIV at a rate 3.2 times higher than white males, and black females were diagnosed nine times more than white females.

The AIDS Healthcare Foundation is one of several organizations hosting local World AIDS Day events. Musical artists Mariah Carey and DJ Khaled, a partner of the foundation, will perform a free concert on Nov. 30 at the Shrine Auditorium, located at 665 W. Jefferson Blvd.

“This year’s World AIDS Day is particularly meaningful for AHF because it marks several historic milestones for us, including AHF having over 833,000 patients in our care around the world as we celebrate our 30th anniversary this year,” said Michael Weinstein, the foundation’s president. “When AHF began as the AIDS Hospice Foundation in 1987, we were facing dire circumstances and a lot of uncertainty at the beginning of the epidemic. Each day we were fighting just to keep AIDS patients from having to die in the streets or overcrowded hospitals.”

Advances in medicine have lowered the worldwide sense of urgency to address HIV and AIDS, making World AIDS Day an opportunity to spotlight the lives they continue to claim, and the people most at risk.

“Our hope is that our big concert events will help keep the spotlight on the need for nations to keep their promise to do all they can to stop HIV/AIDS from claiming additional lives,” Weinstein said.

Other organizations around the world helping to lead the fight against HIV and AIDS include UNAIDS – the Joint United Nations Programme on HIV/AIDS – which estimates that there were 36.7 million people worldwide living with HIV/AIDS as of the end of 2016.

The group’s 2017 World AIDS Day campaign, “My Health, My Right,” will help promote its goal of reaching an HIV transmission rate of zero.

“All people, regardless of their age, gender, where they live or who they love, have the right to health,” said Michel Sidibe, executive director of UNAIDS, in a statement. “No matter what their health needs are, everyone requires health solutions that are available and accessible, free from discrimination and of good quality.”