Universal ‘Day of Giving’ outfits kids with clothing, shoes and a sense of pride 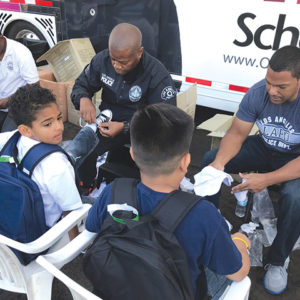 The “Day of Giving” event is a yearly Universal Studios Hollywood tradition designed to connect employees with diverse community organizations, many of which are beneficiaries of the Discover A Star Foundation. Its mission is to empower individuals and families to lead more productive and fulfilling lives.

Children in need received new clothing, books, shoes, backpacks and school supplies, followed by an afternoon of fun inside the theme park.

“More than 250 children in need receive clothing and supplies on each visit,” Seltzer said. “It’s nice for kids to see police officers in another light.”

During the day-long event, LAPD officers fitted the children with a pair of brand new shoes.

“For some of these children, this is the first time they have ever received new shoes,” said Seltzer.