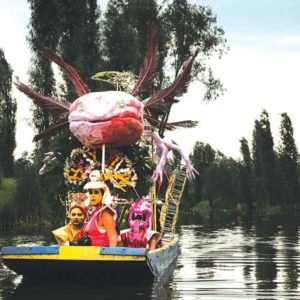 The Formaldehyde Trip by Naomi Rincon Gallardo will be one of the featured works. (photo by Fabiola Torres-Alzaga)

Since opening to the public two years ago, the museum has drawn tens of thousands to its critically acclaimed programs including its first feminist performance series, “The Tip of Her Tongue,” which was inspired by works within the Broad collection that explore language and the body. The new series will launch in January 2018 as part of the Getty’s Pacific Standard Time: LA/LA, a far-reaching and ambitious exploration of Latin American and Latino art in dialogue with Los Angeles, and will continue throughout 2018.

“En Cuatro Patas” continues the exploration of the politicized body, featuring feminist Latinx performance and media artists who ruminate on and fantasize alternative embodiments. Through a series of four programs that include performance, film and video, artists from Los Angeles and Latin America – many of whom will be performing in Los Angeles for the first time – will come together to mobilize the body through varied interventions. The artists featured in this series dissolve boundaries between animal and human while exploring the transformational and pleasurable possibilities of the non-human figure. The series invites artists to take on the corporeality of the abject, the degraded, the non-human, the sub-human – the animal. “En Cuatro Patas” assumes other positions, realities and political imperatives that imagine a world otherwise.

“The Broad has been presenting the feminist art practice since its opening. ‘En Cuatro Patas’ is the museum’s next iteration that brings distinctly fresh perspectives regarding the use of the body in performance,” said Ed Patuto, director of audience engagement. “Throughout the year, the museum will be introducing audiences to a range of daring performances that challenge gender binaries and European traditions of feminism.”

The Broad is located at 221 S. Grand Ave. For information and tickets, visit thebroad.org/programs.