At the western gateway to Thai Town, a new marketplace will open next summer selling exotic foods and handcrafted artisanal goods.

The vibrancy in Thai Town has waned in recent years, and establishing a marketplace is an effort to revitalize the area – a six-block stretch of Hollywood Boulevard between Western and Normandie avenues. Through a motion authored by Councilman Mitch O’Farrell, 13th District, the Los Angeles City Council approved $436,100 in funding for the marketplace, which will be incorporated into an existing building above the Metro Red Line subway station at the corner. 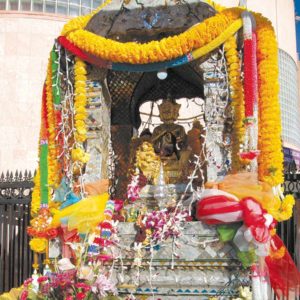 Pedestrians and motorists traveling on Hollywood Boulevard pass an altar located in the heart of Thai Town. (photo by Edwin Folven)

The Thai Community Development Center, also known as the Thai CDC, is spearheading the project. It will serve as a business “incubator” for merchants who are expected to transition into other spaces. The city’s contribution comes from AB 1290 funds, which is money from property taxes that can be used for revitalization projects.

“I am thrilled to be able to partner with the Thai CDC to establish the Thai Town Marketplace,” O’Farrell said. “This daily indoor public market and business incubator is a welcome addition to East Hollywood, and long overdue. The venue will not only create jobs and provide training for new micro-businesses, but it will also offer an opportunity to share locally made products within the community.”

Chanchanit Martorell, executive director of the Thai CDC, said the Thai Town Marketplace has been years in the making. The organization struggled over the last decade to raise private funding, but with the addition of the city’s allocation and financing from J.P. Morgan Chase, the project is close to becoming a reality. The cost went from approximately $900,000 when the marketplace was first conceived to the current estimate of $3.96 million.

Martorell said some of the construction of the space’s interior had been completed last year, but financing ran out. Work will resume on Dec. 5, and the goal is to have it open by July 31, 2018.

“I am very excited,” Martorell said. “Mind you, I have been working on this project for 11 years. I will be very relieved to finally get to the grand opening.”

The Thai CDC currently hosts a farmers market on a plaza at the site on Mondays and Thursdays from 3:30 to 7:30 p.m., and the marketplace will add new cultural offerings. Twelve vendors will sell food inside, offering Thai, Filipino, Chinese and American cuisine. Outdoor kiosks will sell handcrafted items made by local artisans.

“The kiosks will offer Thai textiles, ceramics and lacquerware,” Martorell said. “We are still recruiting vendors. We have already recruited the vendors for the food inside.”

The food vendors have undergone entrepreneurial workshops with the Thai CDC on the basics of operating a business. Martorell called the merchants “micro-entrepreneurs” who will help boost Thai Town’s economy.

“We are shepherding them through all the processes, helping them generate business so they can move into a new space,” Martorell said. “Every three to five years, we expect to bring in new businesses.”

Martorell said Los Angeles was a “first point of entry” for members of the Thai community when arriving in the United States. The Thai population in Los Angeles is approximately 100,000, with approximately 5,000 living in Hollywood, she said.

The stretch of Hollywood Boulevard in Thai Town features many Thai restaurants, markets and shops. The Thai CDC has planted trees and landscaping along the boulevard, installed Thai statues at both ends of the district as gateway markers, created the farmers market, and is currently working on other ideas to stimulate the area’s economy.

“We are happy to serve as an anchor for economic development at the gateway to Thai Town and for small businesses in East Hollywood,” Martorell added. “To finally see it all come together and the vision realized will be an exciting moment.”