What looks like another pizzeria in Hollywood is actually so much more. 800 Degrees Pizza founder and executive Chef Anthony Carron created his first authentic Neapolitan-style pizzeria in 2012 in Westwood Village. What makes his pizza different is the delicious Old World flavors made with chewy, hand-stretched dough, innovative sauces, premium-quality cheeses, farm fresh produce and charcuterie. Now, Carron and new CEO Tommy Lee are turning up the heat with a new 800 Degrees concept in Hollywood. Not only does this location offer a new look, but they are introducing rotisserie chicken, new side dishes, desserts and craft cocktails. 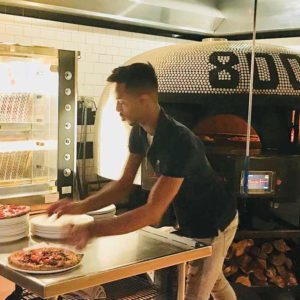 The oven at 800 Degrees can cook a pizza in 90 seconds. (photo by Jill Weinlein)

Carron is a St. Louis native who moved out West in 2001 to pursue a career in fine dining. He worked at Michael Mina’s San Francisco restaurant, AQUA and within six years he became the executive chef of the Mina Restaurant Group. During his tenure, Carron developed and opened more than a dozen high-profile, fine-dining restaurants throughout the country. He left the Mina Group 2011 and launched 800 Degrees one year later.

His new 800 Degrees Hollywood is inspired by visiting Isola d’Ischia, a volcanic island off the coast of Naples. While eating at a variety of rosticcerias and pizzerias, Carron noticed a connection between the union of pizza, rotisserie chicken and salad.

Carron partners with Palisades Ranch to provide the all-natural rotisserie chickens to his guests. The chickens are skewered on long spinning rods, roasted in an oven, and self-basted as the chickens rotate evenly in its own juices. Whole, half and quarter chickens are available to eat in or take home. Side dishes include roasted fingerling potatoes, shaved Brussels sprouts, a farm green salad and ancient quinoa tabbouleh.

Carron also makes fresh sauces to enhance the chicken, including a Middle Eastern tahini sauce; 800 Degrees barbecue sauce; and my favorite, a light green Peruvian jalapeno-cilantro offering cool and earthy flavors to dip into with bite -sized pieces of chicken.

What makes 800 Degrees unique is the specially designed wood-fired stone hearth ovens that burn almond wood. This offers a subtle, smoky taste to the pizzas and everything else cooked in the pizza oven.

The beauty of almond wood is that it burns extremely hot compared to other woods, allowing temperatures to reach 800 degrees, baking pizza to perfection in about 90 seconds.

The interior of 800 Degrees Hollywood is completely redesigned with new lighting and warm brown leather booths. On the side of the Sunset and Vine walkway, near The Hungry Cat, is an expanded outdoor patio decorated with Peroni umbrellas as a canopy for comfortable dining. Guests can sip cocktails, a glass of wine or cold beer.

Another spot for libations is hidden upstairs at Sunset & Vinyl, a funky, retro cocktail den offering high fidelity record players and a nice selection of vinyl records. Guests can also bring an album from their own collection.

Carron hired designer Richard DiSisto to design the speakeasy type of lounge. The lights are low in the inviting 1930s study accompanied by midcentury furniture and period knick-knacks that include luggage, old school art pieces and light fixtures.

“It’s a place where you can get away from the craziness and hubbub of Hollywood and have your own private sanctuary,” Carron said.

Carron hired his long-time friend mixologist Devon Espinosa as the consulting beverage director for 800 Degrees and Sunset & Vinyl. From tending bar at The Tasting Kitchen in Venice Beach, to being hand-picked by Top Chef winner Michael Voltaggio to lead the bar program at Ink, Espinosa has created an interesting cocktail list with names of drinks that include Rich Mahogany made with bourbon; Bubba’s Way made with rye; and a tequila blanco-based Off Sunset, mixed with grapefruit, jalapeño and a pomegranate juice grenadine. There are about 13 varieties of beer available by draft, bottle and can and a selection of red and white wines by the glass. It’s a fun place to hang out and hear some vintage tunes.

Pizza, pasta and a whole lot more at Numero Uno