The Mid City West Community Council’s Planning and Land Use Committee supported a project that will bring housing and commercial space to a property at 8000 Beverly Blvd., on the southwest corner of the intersection with Edinburgh Avenue. 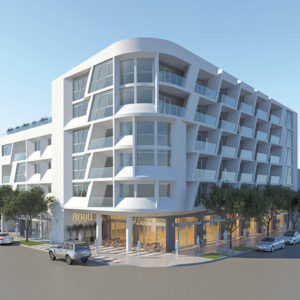 A rendering shows how the building would be configured near Beverly Boulevard and Edinburgh Avenue. (photo courtesy of PLUSARCH. INC.)

The project will include 48 rental units and 7,400 square feet of ground-floor commercial space, according to plans filed with the city by developer Beverly Pacifica LLC and posted on the Mid City West Community Council website. The project would replace a one-story building that was formerly used as the office for SBE Entertainment and has most recently been used as studio/office space.

Scott Epstein, chair of the Mid City West Community Council, said the committee supported an original version of the project that calls for a five-story building as opposed to a revised six-story, 58-unit building that would include more affordable housing. The original plans call for four affordable units for individuals and families with very low income. The full council is expected to consider the project on Dec. 12.

“The bottom line is, we need more housing,” Epstein said. “There is a lot of transit near that location. Putting it on a boulevard that is heavily traveled makes a lot of sense.”

Multiple calls to the developer were not returned. A spokesperson for Councilman Paul Koretz’s office did not have any further information about the development.

According to the project description, the project would feature two levels of subterranean parking with 84 spaces and 61 bicycle parking spaces. It would range in height from approximately 47 feet to 62 feet. The building would have 43,050 square feet of floor area. The developer is seeking a variance from city zoning for the site, which allows for half of the proposed floor area ratio and buildings of a maximum of three stories, or 45 feet.

The public is invited to weigh-in on the project at the Mid City West Community Council’s Executive Board meeting on Dec. 12 from 6:30 to 10 p.m. at the National Council of Jewish Women/Los Angeles’ Council House, 543 N. Fairfax Ave.

Baldoria is a fun aperitivo cafe in DTLA