On Sunday, Dec. 3 at 7 p.m., Los Angeles Children’s Chorus will ring in the holidays at Walt Disney Concert Hall with Grammy Award-winning opera singer Susan Graham and members of the Los Angeles Philharmonic in a concert featuring the world premiere of composer Paul Gibson’s “Ring Out, Wild Bells,” based on Lord Alfred Tennyson’s beloved poem and arranged for chorus, organ, strings and handbells. 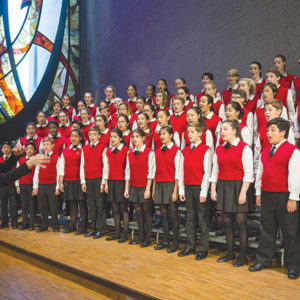 The performance, as part of the LA Phil’s “Sounds About Town” series, will also include a range of classical works, holiday carols and readings. LACC Artistic Director Anne Tomlinson will lead the program of musical selections interspersed with readings drawn from works by E.E. Cummings, Kenneth Grahame, Theodore Roethke, Robert Louis Stevenson, St. Francis of Assisi and Fra Giovanni Giocondo.

“This evening of music and poetry was inspired by ‘A Festival of Lessons and Carols,’ a cherished annual Christmas Eve tradition introduced in 1918 by King’s College Choir in Cambridge, England, that touches on universal human experiences through thoughtful verse and moving song and has been broadcast around the globe by the BBC every holiday since 1930,” Tomlinson said.