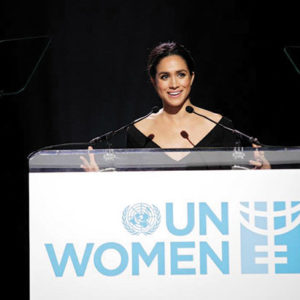 “Over 10,000 women of great heart and right conscience have graduated from Immaculate Heart – and we are proud to count Meghan Markle, Class of 1999, among that number,” said Maureen Diekmann, president of Immaculate Heart. “As a global ambassador for World Vision Canada, Markle has campaigned for clean, safe drinking water. Additionally, as the UN Women’s Advocate for Political Participation & Leadership, she has spoken up for women’s rights and gender equality.”

“Today, we at Immaculate Heart extend our best wishes to Markle on her engagement to His Royal Highness, Prince Harry,” Diekmann added.

Throughout the day, Immaculate Heart’s phone lines were busy with media inquiries about the alumna’s academic and extracurricular history. Camera crews and news vans pulled into the campus lot, and reporters vied for student reactions to the breaking news.

Markle attended Immaculate Heart High School and Middle School. During her high school years, Markle performed in theatrical productions at Immaculate Heart and Loyola high schools. During her senior year, she served as a student leader for the senior class Kairos Retreat, a role typically reserved for students known for their empathy as well as their abilities to listen and guide students in reflective conversations.

Although many students described news of the engagement as “exciting,” Mia Speier, the high school’s student body president, said she was most impressed with Markle as a “strong” woman and model humanitarian.

“The fact that she has walked through our hallways here and is an advocate for women is very inspiring,” Speier said.