Holiday lighting returned to Hollywood Boulevard for the first time in four years on Nov. 20, with local officials gathering at Hollywood and Highland for a ceremonial flipping of the switch.

“Our lights are ready,” said Jeff Zarrinnam, the Hollywood Chamber of Commerce’s chair of the board. “They are our actors tonight. And we’re going to have some action, again, on Hollywood Boulevard.” 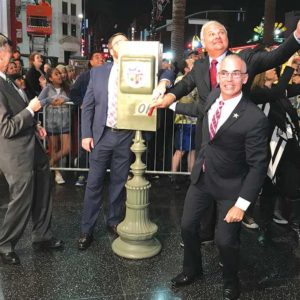 Local leaders led a countdown before pulling down a level to light up Hollywood Boulevard. (photo by Luke Harold)

The lights adorn a one-block radius at Hollywood Boulevard’s intersections with Highland Avenue and Vine Street. Decorators wrapped 54 palm trees with permanent lighting. Each tree has two RGB lamps installed under its crown to light the palm fronds. The lights were made possible by the Hollywood Chamber of Commerce, which purchased the decorations, and the Hollywood Entertainment District, which agreed to handle the ongoing maintenance.

Councilman Mitch O’Farrell, 13th District, joined leaders from both organizations, along with residents and visitors who gathered in front of the Metro station for the ceremony.

“This is a one-of-a-kind place in the world, on the planet,” O’Farrell said. “We care so much about this community, we know what we have and we value it, we cherish it. We value its history, its culture, its future. It is in that spirit that we dedicate these lights. And let’s keep them going. Let’s keep the vibrancy in Hollywood, let’s [keep] cleaning it up, let’s make sure it’s safer.”

The councilman then helped lead a countdown and pull down a large lever to activate the boulevard’s new decorations.

The tree lights will remain year-round, but the accompanying holiday decorations will be removed after New Year’s Day. The RGB lamps can be programmed to project different colors, allowing the Hollywood Entertainment District to make adjustments for different holidays.

“We believe the decorations will make an enormous difference along the boulevard and will help to bring back a festive spirit,” said Leron Gubler, president and CEO of the Hollywood Chamber of Commerce, who emceed the event.

“We are pleased to bring even more glitter to Tinseltown this season with spectacular new lights,” said Kerry Morrison, executive director of the Hollywood Entertainment District. “Plus, with the addition of new permanent lighting, residents and visitors to Hollywood Boulevard will get a dose of Hollywood magic all year long.”

Thanksgiving volunteers help those in need