On Saturday, Nov. 11, the Academy of Motion Picture Arts and Sciences held the ninth annual Governors Awards ceremony to honor lifetime achievements in the film industry. 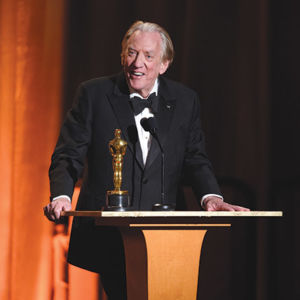 The Board of Governors presented honorary awards to writer-director Charles Burnett, who wrote and directed films such as “Killer of Sheep” and “My Brother’s Wedding”; cinematographer Owen Roizman, who work includes “Tootsie” and “The Exorcist”; actor Donald Sutherland, who starred in “The Dirty Dozen” and “Invasion of the Body Snatchers,” among many other films; and director Agnès Varda, who pioneered the French New Wave movement with films like “La Pointe Courte” and “Cléo from 5 to 7.”

“Between weight and lightness, I choose lightness,” Varda said. “I feel I am dancing – the dance of cinema.”

The evening also saw a special Oscar presented to Alejandro Iñárritu’s “CARNE y ARENA” virtual reality installation. The Academy’s Board of Governors voted to present the special award to the VR project, currently on view at Los Angeles County Museum of Art, in recognition of the installation as a “visionary and powerful experience in storytelling.” The exhibit is sold out through Feb. 11, 2018, however, additional tickets may soon be released.