“We’re thrilled with this win and so grateful to everyone who voted and spread the word – their local pride generated nearly 60,000 votes for the Formosa,” said Adrian Scott Fine, director of advocacy for the Los Angeles Conservancy. “We’re particularly grateful to our lead partner in the campaign, the 1933 Group, who played a key role from start to finish and will use the funds to help rehab the Formosa’s original trolley car. We’re excited to bring significant funding to a local preservation project, and we look forward to celebrating at the Formosa when it opens next year.” 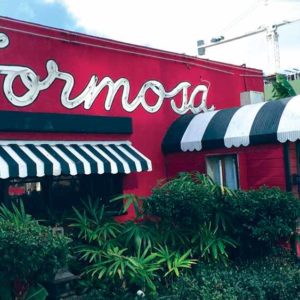 The Formosa, closed since December, was in a national contest that awarded shares of $2 million in preservation funding to projects throughout the country that received the most online votes from supporters. The funding is issued through the Partners in Preservation: Main Street campaign, created by the National Trust for Historic Preservation and American Express.

“The support of the Los Angeles Conservancy and the National Trust during this campaign has been invaluable to us,” said Dimitri Komarov of 1933 Group. “We are completely honored and humbled that our plans for restoring the Formosa Café have been so appreciated by the city. Thank you, Los Angeles, for trusting us to help revive this historic icon.”

Twenty-four other venues from across the country also competed for votes, including two others in California. Each venue was allowed to request up to $150,000 of the $2 million.

“We can hardly believe that the city of L.A. has been able to band together like this! To see all of our loyal patrons of 1933 Group and our citywide neighbors step it up and vote means the world,” said Bobby Green of 1933 Group. “We can’t wait to share the updates and progress of the new Formosa Café when it debuts next year.”

‘Thor: Ragnarok’ tops all other God of Thunder adventures