Homeboy Industries’ Father Greg Boyle will appear for a ticketed book signing and discussion on his second book, “Barking to the Choir: The Power of Radical Kinship.” The book signing is on Tuesday, Dec. 12 from noon to 7 p.m. at All Saints Church, 132 N. Euclid Ave., in Pasadena. Tickets start at $28 for admission and a book. 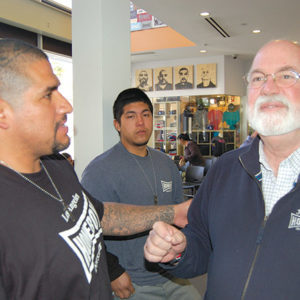 Boyle is a Jesuit priest and the founder of Los Angeles-based Homeboy Industries, the largest gang-intervention, rehabilitation and reentry program in the world. Founded in 1988, Homeboy Industries gained national attention when Boyle published his 2010 book, “Tattoos on the Heart,” which became a New York Times bestseller.

As Homeboy Industries approaches its 30th anniversary, Boyle shares what three decades of working with gang members has taught him – and what he hopes it can teach readers – about faith, compassion and the enduring power of human connection.

In “Barking to the Choir: The Power of Radical Kinship,” Boyle reveals how compassion is transforming the lives of gang members. It focuses on the stories of people like Sergio – who was arrested at age nine, was in a gang by age 12 and was serving time shortly thereafter – who now works with the substance-abuse team at Homeboy Industries to help others with sobriety. The book also tells the story of Jamal, who was abandoned by his family when he tried to attend school at age seven and gradually finds forgiveness for his schizophrenic mother, and new father Cuco, who never knew his dad but thinks of a daily adventure for his four-year-old son.

The former gang members’ stories show how life can be improved when they receive unconditional love and kindness. “Barking to the Choir” invites people to find kinship with one another, according to the publisher.

Boyle will also appear for book signings on Tuesday, Dec. 12 at 6:30 p.m. at Diesel Bookstore at 225 26th St., #33 in Brentwood, and on Dec 13 with Pages Bookstore at the St. Cross Episcopal Church, 1818 Monterey Blvd., Hermosa Beach. All proceeds from book sales and events benefit Homeboy Industries. For information, visit homeboyindustries.org, vromansbook-store.com, dieselbookstore.com and pagesabookstore.com.