“Mano-Made: New Expression in Craft by Latino Artists” is running through Nov. 25 at the Craft in America Center.

Craft in America will focus on the work of three individual artists who use craft to articulate messages about American culture, personal experiences, Latino identity, and the ever-mutating socio-political tensions that exist in Los Angeles and California as a whole. 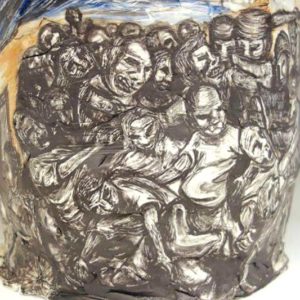 “Torito” by Gerardo Monterrubio will be one of the featured works. (photo courtesy of Craft in America Center)

The second of three exhibitions will include a group of ceramic sculptural works by Oaxaca-born and Los Angeles-based artist Gerardo Monterrubio. The artist is a master storyteller and illustrator who gives new relevance to the ancient tradition of the decorated ceramic vessel. Melding stylistic elements of Mexican mural painting with his artistic origins as a graffiti artist, Monterrubio approaches porcelain as an architectural surface. His graphic, polychromatic imagery draws from his own experiences and reflects broader contemporary themes from Mexican and American urban cultures – documenting his visions on these enduring objects. Each of his forms is blanketed with a proliferation of raw imagery that elicits a personal investigation, as though one is peering into a dream or memory.

Monterrubio’s sculptures occasionally take the shapes of identifiable objects but more commonly, they bubble and stretch into amorphous yet vaguely corporeal masses. Much like skin to the tattoo artist, the ceramic surface is Monterrubio’s canvas. Each piece encapsulates the feeling of peering into an overflowing sketchbook filled with designs, images and suggestions. Narratives are located amidst a backdrop of scattered buildings, and portraits of people and animals float in and out of each scene. Narratives have been painted on vessels since the beginning of culture. Monterrubio recently began teaching at Long Beach City College after completing his MFA at UCLA in 2013.

The Craft in America Center is located at 8415 W. Third St.