In anticipation of World AIDS Day on Dec. 1, AIDS Healthcare Foundation has launched a new billboard outdoor advertising to call attention to the millions of people still affected by HIV/AIDS around the globe today. 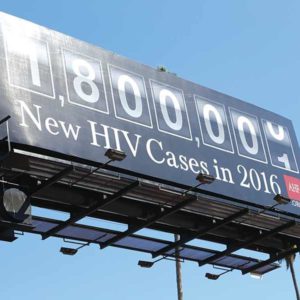 Inspired by vintage fuel pump counters, the billboards draw attention to staggering statistics from UNAIDS on the global HIV/AIDS epidemic, including “1,000,000 AIDS Deaths in 2016”; “1,800,000 New HIV Cases in 2016” and “20,000,000 Untreated HIV Cases in 2016.”  The final number on each billboard appears to be rolling, a visual allusion to the fact that the numbers of individuals directly affected by HIV/AIDS continue to increase.

“Each year as we commemorate World AIDS Day, we like to stop and access the progress that has been made in the fight against HIV/AIDS around the world and identify those areas where our efforts still need to be refocused and intensified,” said Michael Weinstein, the foundation’s president. “As AHF celebrates its 30th anniversary this year and the milestone of having over 820,000 patients in our care across the globe, we are encouraged that millions of lives have been saved through targeted prevention efforts, testing and breakthrough medical treatments.”

The billboards started appearing in late September in high-visibility locations around Los Angeles, Brooklyn, Atlanta, Washington, D.C., and South Florida, and are scheduled to run through mid-November.