Join Arena Cinelounge from Nov. 18 to Dec. 9 as the arthouse theater shines a spotlight on femme noir with Dynamic Dames, a series of screenings featuring fascinating women of the 1940s. 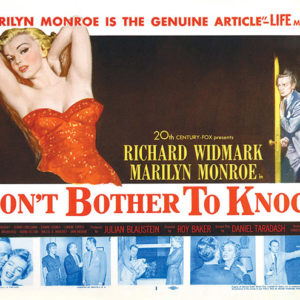 During World War II, while many of Hollywood’s leading men were fighting with the Allied Forces, the city’s leading women were their own force to be reckoned with, particularly in the dark, crime-ridden underworlds of film noir. Though normally associated with “tough guys,” close to 30 percent of film noirs made between 1940-1950 featured strong female leads, and were written or co-written by women, a high number for what is considered a male-oriented genre.

Hollywood stars like Joan Crawford, Ingrid Bergman, Olivia de Havilland, Joan Fontaine and Lucille Ball triumphed in the genre as more than mere femme fatales – they were the dynamic main characters in dozens of women-centered noir films. Titles like “Rebecca,” “Gaslight,” “Mildred Pierce,” “Leave Her to Heaven,” “The Spiral Staircase” and “Beyond the Forest” typify some of the most famous femme noir classics.

On Nov. 18, the theater will show “Lured,” starring Lucille Ball, the 1947 film about a serial killer in London murdering young women he meets through the personal columns of newspapers.

And on Nov. 25, Arena Cinelounge will play the 1952 film “Don’t Bother to Knock,” starring Marilyn Monroe as a disturbed woman entrusted to watch a couple’s daughter at a New York hotel.

“Leave Her to Heaven” will be presented on Dec. 2. The 1945 film stars Gene Tierney as an obsessive and jealous wife who will go to any length to have her husband all to herself. Finally, on Dec. 9, the theater will show “Woman on the Run.” The film, released in 1950, features Ann Sheridan as a wife looking for her missing husband while being trailed by a killer.

Contact venue for show times. Admission is $16 for each feature-length film, or $50 for the series of four films. For tickets and information, visit arenascreen.com or call (323)924-1644.