JVS Women’s Leadership Network’s Woman to Woman Conference will bring together more than 500 women in the community, from young professionals to philanthropists to executive leaders, at the Skirball Cultural Center on Nov. 14 at 8 a.m.

Haifaa Al-Mansour, the first female Saudi filmmaker, Barbara Morrison, acclaimed jazz singer and recording artist, and Suze Yalof Schwartz, founder and CEO of Unplug Meditation are the speakers. They will share their personal and professional journeys around the conference theme “Unstoppable: The Power of Women.” 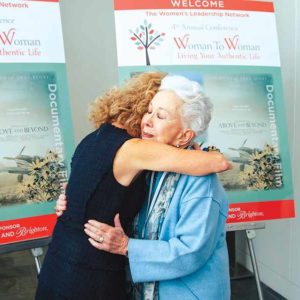 The conference kicks off with a breakfast networking reception and is followed by a luncheon program hosted by Nikki Crawford, the award-winning actress who has starred in a variety of projects in theater, television and film.

Kathy Suto, vice president and general manager of Bloomingdale’s Century City, will receive the inaugural WLN Women’s Empowerment Award, in recognition of her work with the Downtown Women’s Center, dedicated to ending homelessness for women in Los Angeles. The Conference will highlight the personal stories of women whose lives have been profoundly impacted by JVS programs.

“Those good feelings are valuable and long lasting because nothing is more powerful than women joining together to help each other overcome, advance and succeed,” said Nancy Paul, a WLN Leadership Council member and event chair.

All proceeds from the conference support JVS’ programs serving women.  Those supported range from the unemployed and working poor to people with disabilities, at-risk youth, veterans transitioning to the civilian workplace, as well as those participating in WoMentoring, WLN’s signature career mentoring program.

Wolf Blitzer honored by L.A. Museum of the Holocaust