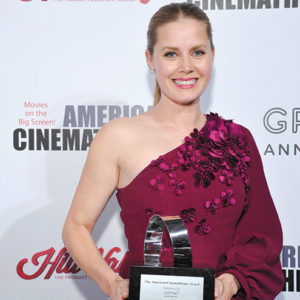 The Sid Grauman Award was presented the same evening to Richard Gelfond and Greg Foster on behalf of Imax. Proceeds from the evening will benefit the year-round programs of the nonprofit American Cinematheque.

“The American Cinematheque is extremely pleased to honor Amy Adams as the 31st recipient of the American Cinematheque award at our celebration this year,” said Rick Nicita, American Cinematheque chairman. “Amy Adams is one of the most beloved, admired and respected actresses in movies today. Her credits range from critical favorites like ‘American Hustle’ and ‘Arrival’ to blockbusters like ‘Enchanted’ and ‘Man of Steel,’ combining strong reviews and commercial success. Her appeal crosses all demographic groups and she continues to broaden her audience with performances that illuminate her movie-star qualities. She has been honored with many nominations and awards from critics, fans and industry organizations all over the world. In the words of one of her directors, she is smart, tough, funny, warm, ambitious and, of course, beautiful. Combined with her shining talents and unequalled likability in a career that is skyrocketing, Amy Adams is the ideal recipient of the American Cinematheque’s 31st annual award.”

“The American Cinematheque is grateful to Gregory Annenberg Weingarten whose generous support through his philanthropic initiative GRoW @ Annenberg will help fund programs at the Cinematheque throughout the year,” said Nicita.

GRoW @ Annenberg is the philanthropic initiative led by Gregory Annenberg Weingarten, vice president and director of the Annenberg Foundation. GRoW @ Annenberg is dedicated to supporting humanitarian efforts across the globe as well as innovative projects in health, education, the arts, and civic and cultural life.

“Working as a visual artist in the city of Paris for 25 years, and now in Los Angeles, I am keenly aware of the importance of cinema – the ultimate art form combining image, sound, music and narrative,” Weingarten said. “I am proud to be a partner with the Cinematheque to support this Hollywood tradition so cherished around the world.”

Adams was the unanimous choice of the Cinematheque Board of Directors selection committee. Since 1986, the organization has annually honored an extraordinary filmmaker in the entertainment industry, who is fully engaged in his or her work and is committed to making a significant contribution to the art of the motion picture.