Thousands to walk in support of AIDS services

The thousands of people walking in this year’s AIDS Walk Los Angeles should feel hope for the future, despite the current presidential administration’s lack of care to ending the epidemic, AIDS advocacy leaders said.

Craig Miller, who founded AIDS Walk Los Angeles in 1985, has seen incredible breakthroughs in scientific HIV and AIDS research, drugs that can not only prevent the disease from being contracted but also medicines that provide people who have  the disease with a healthy life. 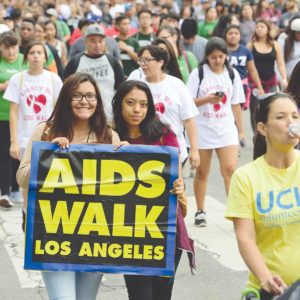 Miller, 58, said it was hard to imagine cities across the United States ending the epidemic when the AIDS Walk first started.

“Fast forward toward to today, and the facts speak to hopefulness,” Miller said. “It’s the actions of people in power that are really going to determine whether we’re going to seize this hopeful opportunity, or squander it. I don’t have a sense of hopelessness, and I don’t think the thousands of people coming out to the AIDS Walk at Grand Park are engaging in an expression of hopelessness. They are engaging in a spirit of determination.”

At least 10,000 people are expected for the event, and organizers anticipate raising $2 million.

The opening ceremony will include messages from Drew Carey, host of “The Price Is Right,” actor Conrad Ricamora (“How to Get Away With Murder”), performer Frenchie Davis (“The Voice”), along with business and community leaders.

The 10K route will showcase architectural and cultural landmarks of the area, and post-walk festivities will include music, dancing, food trucks and the Downtown Divas of Drag show, with stars from “RuPaul’s Drag Race.”

Money raised will benefit APLA Health, which provides food, housing support, benefits counseling and other services to people living with and affected by HIV or AIDS. The organization also provides primary medical, dental and mental health care and HIV prevention services focused on the LGBT and other underserved communities.

The walk comes at a time when advocates in the HIV and AIDS field remain concerned about the direction the federal government will take in continuing to address the AIDS crisis.

In June, six top AIDS experts resigned from the Presidential Advisory Council on HIV/AIDS, noting in a resignation letter published in Newsweek that they couldn’t stand by as President Donald J. Trump and his administration seem unwilling to take the issue seriously, and could end up harming people with HIV and AIDS through its policy decisions regarding health care reform.

“The Trump Administration has no strategy to address the on-going HIV/AIDS epidemic, seeks zero input from experts to formulate HIV policy, and — most concerning — pushes legislation that will harm people living with HIV and halt or reverse important gains made in the fight against this disease,” Scott Schoettes, counsel and HIV project director at Lambda Legal, wrote in the article.

Craig Thompson, APLA Health CEO, said one of his largest concerns is that Republican leaders, in their quest to “repeal and replace” the Affordable Care Act, seem determined to end Medicaid expansion, which would leave many low-income people in Los Angeles with HIV and AIDS without health care.

“The majority of our clients are low-income gay men of color, and prior to Medicaid expansion, they didn’t have health insurance,” Thompson said. “They either worked in a job that didn’t provide health care, or they had spotty work history, and they weren’t engaged in the system. They were people who used the emergency room for primary care when they got really sick.”

In West Hollywood, San Francisco and New York, advocates have pushed forward initiatives to end the epidemic, with West Hollywood working toward its HIV Zero initiative.

Money raised at Sunday’s walk will go to APLA Health to continue its efforts to provide services to a vulnerable population.

The AIDS Walk Los Angeles started in 1985 and was the first walk of its kind in the world.

West Hollywood Mayor Pro Tempore John Duran said the event now is less focused solely on the LGBT population but instead on communities of color who experience high rates of HIV and AIDS.

The AIDS Walk Los Angeles was founded at a time when President Ronald Reagan’s administration was ignoring the AIDS crisis, Duran said. This motivated thousands of LGBT activists to take to the streets to call out government negligence, he added.

Duran said he isn’t fearful about the Trump administration also seemingly neglecting AIDS funding and instead hopes it will rally young people to organize.

A new generation of LGBT people and their allies are realizing how it feels to be discriminated against by the federal government, Duran said.

“If anything, it only energizes us,” Duran said. “It gives us life and new activism and new leadership and new programs. That has been the story of every minority, including the LGBT community. When you’re oppressed, you fight back, you organize, you resist and you build new institutions. I think that’s probably going to be on the horizon.”