Founded by actress Susan French in 1964, Theatre 40 is a nonprofit theater company that was given a permanent home on the campus of Beverly Hills High School in the early 1970s, thanks to the support of then-assistant principal Reuben Cordova. 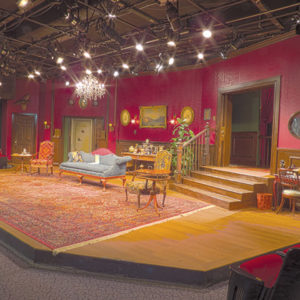 Theatre 40 stages its productions in an elegant 99-seat theater named after Cordova that also serves as its permanent home. The Reuben Cordova Theatre is used exclusively for Theatre 40 performances, which are held during evenings and Sundays when classes are not in session.

“It really is a beautiful theater,” said David Hunt Stafford, artistic and managing director of Theatre 40. “Reuben Cordova was the man who made this happen. Tony Award-winning set designer Ming Cho Lee came in and designed the theater in the early 1970s. It really came together nicely.”

Stafford said he first attended a Theatre 40 production of “Rashomon” when he was a CalArts student in 1974. He realized the acting and production was top notch, and decided someday he wanted to be part of the theater group. In 1989, Stafford joined Theatre 40 as an actor and began leading the group around 2000. He has acted in 71 plays and produced more than 100.

Theatre 40 is comprised of 150 actors of all ages. Many are longtime members of the company. Others join for a while and later move on to larger productions, television, films and other endeavors.

“We have a membership company of actors from the talent pool of Los Angeles,” Stafford said. “Some are from Beverly Hills, but most are from throughout Los Angeles. They come to Theatre 40, but an actor’s career is such that they might be doing a play at Theatre 40 one day and six months later they are at the Ahmanson or they’re doing a movie. That’s why we choose plays with a lot diversity. We have actors who are younger, in their middle ages and older as well.”

The theater company has a core group of longtime subscribers. Theatre 40 is staging six plays during the 2017-18 season, which runs through next June. Currently, Theatre 40 is producing “Vino Veritas” through Oct. 15.

“’Vino Veritas’ is a charming family play that was done by the Jeff Daniels Purple Rose Theatre Company in Michigan. It has two couples getting ready to go to a Halloween party. One of the girls pulls out a Peruvian truth wine. They drink it and the hijinks ensue,” Stafford said. “It’s a comedy, and as a comedy, it appeals to the inner workings of the human experience. It’s a very funny and charming play.”

Next on the bill is “Sherlock Holmes and the Case of the Jersey Lily,” running from Nov. 16 through Dec. 17.

The season rounds out with “The Last Wife” running from Jan. 18 through Feb. 18; “Engaging Shaw” from March 15 through April 15; and “Mr. Pim Passes By” running from May 17 through June 17. Theatre 40 also holds 17 performances of “The Manor” every January in Greystone Mansion. The play focuses on the Doheny family, descendants of a wealthy oil magnate.

Showtimes are 8 p.m., Thursday through Saturday; 2 p.m., Sunday at the Reuben Cordova Theatre, 241 Moreno Dr., on the campus of Beverly Hills High School.

Stafford said he hopes people take advantage of Theatre 40, an exceptional option for live theater right in their backyards.

“We have a very low ticket price, free parking and high-quality productions in an elegant theater with a great cast and a highly trained staff,” he added. “Come and see everything we are doing. You’ll like what’s happening there.”