Approximately 1,000 Santa Monica Boulevard Charter School students clad in orange shirts raised their right hands and swore not to participate in or allow bullying during a ceremony on Tuesday on the school’s playground.

The event coincided with National Bullying Prevention Month in October and Unity Day on Oct. 25. Orange is the designated color for unity and bullying prevention, and the sea of orange on the playground showed the students are getting behind the message. 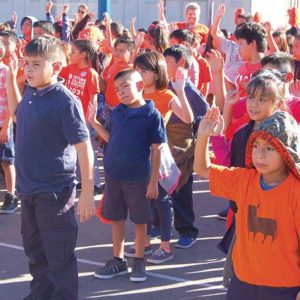 Students took a pledge to end bullying at their campus. The event coincided with National Bullying Prevention Month and Unity Day on Oc. 25. (photo by Edwin Folven)

“We’ve done this for the past three years and it is definitely making a difference,” Principal David Riddick said. “We use this as a day to celebrate children getting along. It helps with the culture here. It’s not just about the day, it’s the whole sense of unity.”

Riddick added that students practice the anti-bullying message throughout the year. Since the school began hosting the event in 2015, instances of school bullying have gone down on campus, Riddick said.

Organizers added that the message to students is if they see someone being bullied, tell a teacher or administrator. Students were also encouraged to reach out to victims of bullying to assure them they are not alone.

“Students will listen, peer to peer,” said Monica Harmon, executive director of the nonprofit Speak Out Against Bullying, which helped organize the event at Santa Monica Boulevard Charter School. “It’s education. If you see something, say something. We don’t want kids to be afraid.”

Sgt. Darrell Davis, with the Los Angeles Police Department’s Hollywood Division, said anti-bullying events are critical because students are the first line of defense against bullying.

“We tell them if you see someone bullying another student, try to talk to them and tell them it’s wrong,” Davis said. “If they don’t stop, tell a teacher or tell the principal. Please, whatever you do, tell someone.”

The LAPD partners with Speak Out Against Bullying to hold similar events at schools throughout Los Angeles. Davis said it is particularly important to reach students at a young age. Santa Monica Boulevard Charter School serves students in pre-kindergarten through sixth grade.

“If you can get to the kids at a young age and they understand that if you see something, say something, it’s huge,” Davis added. “This is our seventh year doing the events in Hollywood and the third year [at Santa Monica Boulevard Charter School]. The first time we had a huge crowd and they asked us to do it again. It’s outstanding.”

Harmon said while the local efforts to stop school bullying are promising, more work needs to be done. New students start school each year, so the message needs to be repeated.

“We’ve made progress but there is an epidemic in schools across the U.S. with bullying,” Harmon added. “We do all that we can to reduce instances. We don’t stop at the end of [bullying prevention] month. We are doing this year-round to keep it out in the limelight.”

Harmon directed parents, teachers and school administrators to her organization’s website for information about preventing bullying. Parents are encouraged to learn about different forms of bullying and to look for warning signs. Bullying takes on many different forms, including physical bullying, cyber bullying and bullying via text messaging. Parents are asked to monitor their children’s internet and phone usage and to set an example in teaching children and their friends that bullying should not be tolerated.

Additionally, teachers and school administrators are encouraged to establish anti-bullying ambassadors so students have someone to turn to when bullying occurs. Mentoring and counseling for victims is another key component. Harmon said an innovative way for schools to encourage more reporting of bullying is to have anonymous boxes so students can avoid the stigma of being known as a tattle-tale. Riddick said Santa Monica Boulevard Charter School uses the anonymous boxes and they have been helpful.

Harmon, Davis and Riddick were joined by a representative from Councilman Mitch O’Farrell’s Office and Special Olympics Southern California global messenger Lucy Meyer. Before the event concluded, the children cheered as a flock of white doves was released, symbolizing peace and unity.

“I am here to tell you bullying is not cool,” said Meyer, who was born with cerebral palsy and said she experience bullying in school. “People get bullied for a lot of reasons. Whatever the cause, bullying must be stopped.”