“Can I help you?” Mansell asked.

The short answer: no. The longer answer is at the heart of a long, heated battle between Hollywood residents and tour bus drivers who each year bring thousands of tourists along the winding roads of the Hollywood Hills, in hopes of spotting a celebrity. Residents have long argued that these tour guides drive erratically, play loud music to entertain guests and falsely claim where celebrities live. 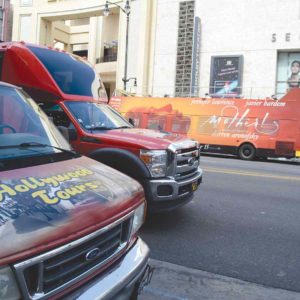 If approved, bus operators would not be allowed to use loudspeakers during tours, and instead would be required to give passengers headphones. Additionally, under Ryu’s proposal, the Los Angeles Department of Transportation, with help from the Los Angeles Fire Department and Los Angeles Police Department, would create a list of routes or streets on which tour buses may not operate due to safety concerns.

Ryu said he hopes to have both measures in place by the end of the year.

“This has been going on for many, many years, if not over a decade where these unscrupulous  drivers are talking on the phone, texting while driving and have no regard for anybody else on the road,” Ryu said.

Until recently, the city was limited in how it could address the numerous complaints from residents about irresponsible tour bus operators.

Drivers often ignore the weight limits on Hollywood streets, and it wasn’t plausible to bring a vehicle scale out every day to regulate them, Ryu said.

Additionally, a motion introduced by Ryu in 2016 and passed by the city council required that tour bus sound systems could not be heard 50 feet from the vehicle. However, enforcing that became an issue.

However, Ryu was able to introduce the motions on Sept. 29 thanks to a new state law, AB 25, which Gov. Jerry Brown signed Sept. 27. AB 25 allows cities in California the authority to require the use of headphones on open-air tour buses and limit the streets on which the buses can operate.

The law also defines a tour bus as either a bus operated by a charter party carrier or a passenger stage corporation that has had its roof modified or removed, or has had other major structural modifications on its roof.

Residents have long argued that some tour bus companies falsely claim where stars live, causing unwanted guests to show up at all hours, and that some drivers are reckless, running stop signs and stopping in the middle of Mulholland Drive for guests to get photos of purported celebrity homes.

Ryu and Hollywood residents were complimentary of companies that operate ethically and appropriately in the area. Some already have headsets for their guests.

Jeff Napshin, Star Track Tours owner, said his company’s vehicles use the sound system that came with the vehicle, which he said isn’t loud enough to disrupt residents.

Napshin said he didn’t want to comment on Ryu’s proposal before meeting with the councilman because he has questions about the motion’s intent.

Napshin said originally, state and local leaders told operators they had concerns about the safety of the tours. If safety is the primary concern, the state should ensure that the California Public Utilities Commission is doing thorough inspections during the required annual vehicle inspections for tour buses, Napshin said.

There are some companies that are unsafe and operate without insurance, he said.

Napshin said his company’s insurance provider helps ensure that the drivers he hires have good driving records. The insurance carrier is stringent, “and that’s a good thing,” he said.

Another tour bus company’s manager of operations, who asked not to be named for fear of retribution from other operators, said he supported Ryu’s proposal to require headphones in tour buses.

“The sound really amplifies off the canyon walls, especially up along Mulholland Drive, so I think it’s our responsibility to be respectful and just try to fly below the radar as much as we can,” he said.

The manager of operations, whose company has been in the tour bus industry for more than 20 years, said in recent years, droves of illegitimate operators who do not have insurance or quality vehicles have flooded the tour business.

“They saw a model that was really easy to carbon copy, and it didn’t take much of an investment,” he said. “You can purchase a van for $8,000, retrofit it for another two grand, and these guys charge $15 or $20 for a tour.”

Mansell, who has lived in a home near Mulholland Drive for 24 years, said on weekends, there are easily 300 tour buses that come through the area. He regularly hears tour guides over their loud speakers, talking about who lives in his house and homes nearby. One name that comes up is singer Katy Perry, who actually is one of his neighbors.

“There are tremendous problems in L.A., like homelessness, but this is a quality of life issue,” Mansell said. “I hate to complain about it because there are so many other problems, but it is a problem that can be and should be regulated.”

Law and order on Melrose