After a prowler was caught on security camera lurking in her yard in late August, Miracle Mile resident Kari Garcia started thinking about new ways to better protect her family and residence, and those of her neighbors.

The suspect was unable to gain entry to her residence, and was later arrested by police and charged with trespassing. But the incident scared Garcia and prompted her to unite her neighborhood against crime. That effort has culminated in a plan by the Miracle Mile Residential Association to hire a private security patrol for the neighborhoods between La Brea and Fairfax avenues, and Wilshire and San Vicente boulevards. 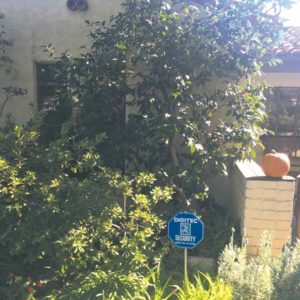 Some houses in the Miracle Mile have already taken additional safety measure by installing their own home security systems. (photo by Rebecca Villalpando)

Many people in the Miracle Mile area already individually contract with private security companies to monitor their residences. If enough people express interest, a permanent patrol could be established that would be specifically assigned to the area. Garcia said the home owners association also wants to establish a neighborhood watch and is signing up residents to serve as block captains. The MMRA discussed the patrol and neighborhood watch at a meeting on Oct. 16.

“It all started with [me] having a prowler on my property. That was enough to know there is a problem,” Garcia said. “Our goal is to get a neighborhood watch going and to try to get people to better secure their properties. There is no one answer. A security patrol provides another layer of security.”

MMRA President Jim O’Sullivan said the area has been recently plagued by residential burglaries and auto thefts and break-ins. If a dedicated patrol is established in the Miracle Mile, the security officers would drive around the neighborhood, investigate suspicious activity and notify police when necessary. O’Sullivan added that a patrol would not be a substitute for police, but could deter crime.

“Look, I love the police and I love the firefighters, but they are spread too thin,” O’Sullivan said. “We have to go out and have security because the police can’t cover it. That’s coming from someone who loves the cops. It’s not their fault.”

Capt. Anthony Oddo, commanding officer of the LAPD’s Wilshire Division, said previously that he does not have an issue with people hiring private patrols as long as residents are aware that they are not replacements for police. Officer Cleon Joseph, with the Wilshire Division, added that it is common for people to hire security companies and guards play a role in preserving public safety.

“People do it all the time. They are not police officers, but if they are extra eyes and ears out there, it’s just a common sense thing,” Joseph said. “I don’t see an issue with having extra eyes and ears. If I owned a business, I would have a security guard.”

Joseph added that regardless of the statistics, if the perception is that crime is increasing, more needs to be done. He said the LAPD devotes resources to different areas based on crime reports, and the department is open to meeting with community groups and residents to develop strategies.

“There are spikes here and there and we are addressing them,” Joseph said. “Sometimes, citizens don’t see it that way. [Crime is] up to them and that’s their perception of it. That’s why we are building partnerships to quiet their fears and let them know what we are doing. If that’s the perception, we need to reassure them.”

O’Sullivan said members of his group canvassed the neighborhood and saw many residents have signs posted indicating their properties are protected by private security companies. The MMRA is looking into using Bel Air-based ACS Security if the decision is made to hire a private security company for a dedicated patrol.

Logistics and other issues would be considered as the plan moves forward. The security company would be armed and would assume all liability, O’Sullivan stressed.

“What we want to do is have a dedicated patrol,” O’Sullivan added. “The more people who sign up, the more we can move forward. They are really the eyes and ears.”

Garcia added that she is continuing efforts to get people signed up as block captains and for the patrol, which will cost approximately $50 per residence. The association will have a better idea about how to move forward when it convenes for its next meeting, tentatively scheduled in January.  She asked anyone interested in joining the neighborhood watch or seeking more information about the patrol to email her at kari.garcia@miraclemilela.com, or fellow MMRA member Kelly Perkins at kelly.perkins@miraclemilela.com.

“The only way this is going to work is to all work together,” Garcia said.

Moving on up in WeHo’s eastside