Museum Row’s cultural and artistic identity is poised to dramatically change soon, with the Los Angeles County Museum of Art planning a transformation that will unify its campus with a building spanning Wilshire Boulevard. 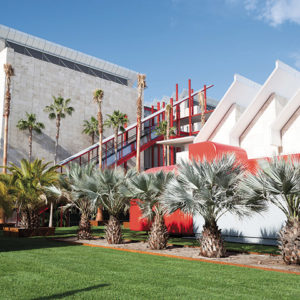 And while art and film lovers await what museum officials said will be a renaissance for visitors and residents of the City of Angels, there are many offerings available today for those seeking an enriching and education experience in the arts.

LACMA has numerous exhibits to delight patrons this fall. One of the most colorful is “Chagall: Fantasies for the Stage,” highlighting how music and dance shaped the artist’s practice. The exhibition concentrates on four productions Marc Chagall helped design for the stage: the ballets “Aleko” (1942), set to music by Tchaikovsky; “The Firebird,” by Igor Stravinsky (1945); “Daphnis and Chloe” (1958), by Maurice Ravel; and Mozart’s “The Magic Flute” (1967). Chagall’s vibrant costumes and set designs brought the operas to life. Many costumes have never been exhibited in the United States since they appeared on stage decades ago. Also featured is a selection of paintings of musicians and lyrical scenes, nearly 100 works on paper and rare 1942 footage of the original “Aleko” performances.

LACMA visitors will also enjoy “Found in Translation: Design in California and Mexico, 1915–1985.” The groundbreaking exhibition focuses on themes of Spanish colonial inspiration, pre-Hispanic revivals, folk art and craft traditions, and Modernism. See how modern and anti-modern design movements defined artistic mediums in the 20th century and more than 250 drawings, photographs, films and models that influenced California and Mexico’s buildings. The exhibit also highlights how art influenced the design of furniture, ceramics, metalwork, graphics and murals. It is the first exhibit to examine how California and Mexico’s connections shaped the material culture of each place.

Fans of textile artistry will enjoy a display of two Persian carpets donated to the museum by J. Paul Getty. Dating to the 16th century, the carpets are rarely exhibited because of their size and sensitivity to light. Learn about their history before and after they left Iran, their cultural, political and religious meaning, and how weaving techniques evolved over the centuries. 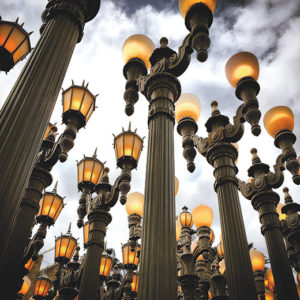 On Nov. 19, LACMA will debut “Painted in Mexico, 1700–1790: Pinxit Mexici,” a groundbreaking exhibition devoted to 18th century Mexican painting. The period was marked by major stylistic developments that can be seen in more than 120 works, many of which were restored and have never been displayed.

Although Museum Row’s transformation is a couple of years away, LACMA officials are hard at work designing plans and refining the vision for the campus.

LACMA plans to begin construction on its transformation around the same time the Academy Museum opens. With such a dramatic transformation on the horizon, now is the perfect time to see all that LACMA has to offer and take advantage before everything changes.