The Broad has announced a schedule of performances and film screenings inspired by its upcoming special exhibition, “Yayoi Kusama: Infinity Mirrors,” the first institutional survey to explore the evolution of the celebrated Japanese artist’s immersive “Infinity Mirror Rooms.” 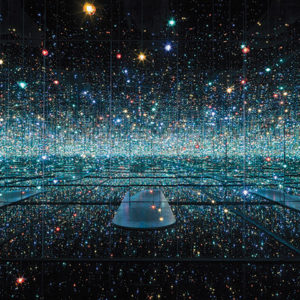 The exhibition will provide visitors with a unique opportunity to experience six of Kusama’s infinity rooms – the artist’s most iconic kaleidoscopic environments – alongside large-scale installations, paintings, sculptures and works on paper from the early 1950s to the present. The artworks contextualize the profound role the concept of self-obliteration, connectivity and infinity have played in the artist’s work. “Yayoi Kusama: Infinity Mirrors” will be on view from Saturday, Oct. 21 through Jan. 1.

“Through our Kusama exhibition-related programming, The Broad intends to expand our visitors’ understanding of the context in which Kusama’s ‘Infinity Mirror Rooms’ came about,” said Ed Patuto, director of audience engagement for The Broad. “Throughout Kusama’s career, her political, spiritual and aesthetic interests have manifested in diverse forms. The Broad’s programming will provide opportunities to experience the breadth of Kusama’s creative practice through films of her performances, as well as through performances by artists like the Joshua Light Show, Ron Athey and Sean Griffin, who engage similar concerns of self-obliteration, repetition and radical connection.”

In conjunction with the exhibition, The Broad will present “Joshua Light Show” with live musical performances by Lesley Flanigan, Miho Hitori’s New Optimism and Noveller. An immersive environment of light and sound will be created in the spirit of Kusama’s self-obliteration performances. The performances will be held in Oculus Hall at The Broad, 221 S. Grand Ave., downtown.

Tickets will also include timed-admission to the “Yayoi Kusama: Infinity Mirrors” exhibition.

The Broad will also present looped screenings of short films capturing many of Kusama’s iconic 1960s performances, as well as more recent short films of Kusama singing, performing and reciting poems, on select Thursdays and Saturdays throughout the run of the exhibition. The films provide insight into the role performance has played in Kusama’s practice throughout her career.

Following the conclusion of the exhibition, The Broad will continue its exploration of Kusama’s work through the premiere of Ron Athey and Sean Griffin’s “Gifts of The Spirit: Prophecy, Automatism and Discernment.”

The Petersen offers a look at Italian design