Having marriage troubles? Don’t watch this film with your spouse. The third Stephen King film adaptation this year, “Gerald’s Game” approaches horror from a different point of view. Take a break from ghosts, boogeymen and billionaires trying to purge the marginalized. This one’s all about the slow burn, a horror-drama that’s all too timely right now.

The Burlingame’s marriage is on the outs. Their fix: a weekend getaway involving handcuffs and husband Gerald’s (Bruce Greenwood) warped sex fantasy. Things quickly get to be too much for wife Jessie (Carla Gugino), but that’s not the only problem at hand when hubs falls over dead from a heart attack, leaving his betrothed cuffed to a very sturdy bed.

The nearest neighbor is miles away, and the front door – wide open – is primed to welcome unwanted company, including a stray dog that Jessie previously tried to befriend. Dehydrated and weak, Jessie’s mind wanders, causing to her question if she’s truly alone in the house or if perhaps an unwanted quest lingers.

This isn’t a traditional horror film. In place of jump scares and sadism – though be warned, one particular moment might make you dry-heave or at least turn your head – the torment on screen occurs mostly in Jessie’s head. Restricted to a bed, she confronts her past and interacts with versions of herself and Gerald in her mind.

The effect is potent. Frankly, it’s shocking no one has tried to adapt this one into a stage play before.

Gerald’s name might be in the title, but this is Jessie’s show. We watch as Gugino plays herself and an idealized, more confident apparition calmly explaining how best to survive and break free. Gugino is an unsung heroine of the acting community, a constant success story in any film or television role she takes on. It’s a delight to see her depict multiple characters, who work their way through past and now present trauma.

For a second time, director Mike Flanagan (“Hush,” “Ouija: Origin of Evil”) creates a masterful piece of horror cinema for Netflix. Like “Hush,” which only featured four characters in a home-invasion story, he enjoys a small cast; only a small handful of actors have speaking parts in “Gerald’s Game.”

This trend will likely end soon, however, come Flanagan’s next project with Netflix, 2018’s “The Haunting of a Hill House,” a television series based on the 1959 novel which will also star Gugino and Flanagan’s wife Kate Siegel, who stars in “Hush” and “Gerald’s Game.”

As far as Stephen King adaptations go, “Gerald’s Theme” is more drama than edge-of-the-seat thrills. But that shouldn’t discount the film as a worthy horror film contribution. It serves as a splendid reminder that monsters don’t need fangs or a butcher’s knife. Sometimes, the worst enemy dwells within, untouchable by even an exorcist’s holy water.

Ever wonder what the babysitter did while you cozily slept upstairs? She had a few friends over for a round of spin-the-bottle and then a ritual murder, according to “The Babysitter,” a horror-comedy that’s just as campy as it is violent. 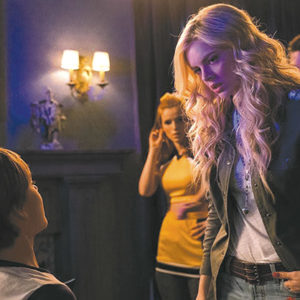 Cole (Judah Lewis) is the only 12-year-old he knows who still has a babysitter. That’s not shocking since he has a lot of maturing to do. Overwhelmed by anxiety and fear of everyday occurrences, he feels most safe around his parents and sitter, Bee (Samara Weaving), the love of his life. When his parents go away for an evening, he wonders what happens downstairs while he slumbers.

Director McG throws his name behind TV series “Supernatural,” “Chuck,” and “Lethal Weapon,” most of which turn out well. But his directing career, including both “Charlie’s Angels,” drowns in mediocrity. So when I say “The Babysitter” is one of his best films to date, that’s both a compliment and a bit damning.

In better hands, this material would be funnier and have the charm of horror-comedy legends like “Shaun of the Dead,” and “The Cabin in the Woods.” Helmed by McG, it’s watchable with easy punchlines and stereotypes about millennials.

Still, there’s something to be said about a film easily enjoyed with the right company and the right drink. From the opening scene, it includes a fair share of wit (or at least attempts at wit), and things go south for our protagonist. It’s a laughably bloody mess in a mostly good way.

360 views and sushi at Sora