Defendant pleads no contest to 2014 Palm Avenue attack in WeHo

A 30-year-old man at the center of a controversial incident in West Hollywood in 2014 pleaded no contest on Sept. 25 to two counts of attempted murder. 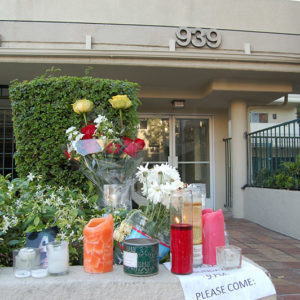 A memorial for the victims was placed in front of the apartment building at 939 Palm Avenue in 2014. (photo by Edwin Folven)

The defendant, Alexander Tor McDonald, has been in custody since the April 2014 incident at 939 Palm Ave., in which sheriff’s deputies mistakenly shot and killed a man who they thought was a knife-wielding suspect. McDonald is scheduled to return to court on Oct. 6 for sentencing. He faces 14 years and four months in state prison.

The incident occurred on April 7, 2014, when deputies received a call about a man threatening people with a knife in an apartment on Palm Avenue. When deputies arrived, they huddled outside the front door before attempting to enter the unit.

As deputies prepared to go inside, the door swung open and two men ran out. The man in front was covered in blood and police believed the second man was attacking him. Deputies shot and killed the second man, John Winkler, 30, and accidentally shot and wounded the other man, Liam Mulligan.

Inside the apartment, McDonald was involved in a physical struggle with a third victim. Deputies took McDonald into custody.

The three victims were McDonald’s roommate and two friends. McDonald had allegedly been acting erratically, grabbed a knife and attacked the other men. Authorities have not said what prompted the attack.

Shortly after the incident, the Los Angeles County Sheriff’s Department admitted that the shooting of Winkler and Mulligan was a mistake. Winkler’s family later received $5 million from the county in a settlement, and Mulligan received $2.5 million.

Because Winkler was killed during the incident, McDonald was charged with murder. He had entered a plea of not guilty by reason of insanity, but withdrew that plea and pleaded no contest to the lesser charges of attempted murder as part of an agreement with prosecutors, said Los Angeles County District Attorney’s Office spokesman Ricardo Santiago. McDonald also admitted to the allegation that he caused great bodily injury to the victims. Had he been convicted of murder, McDonald could have faced life in prison.