While the hepatitis A outbreak in California has officially been declared a state of emergency, government and nonprofit organizations in Los Angeles County are actively working together to stop the epidemic in its tracks. 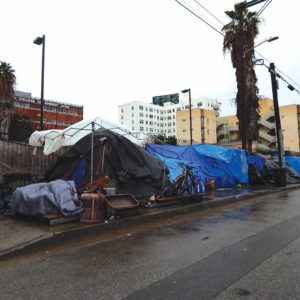 The rising homeless populaton has exacerbated the spread of hepatitis A in San Deigo and Los Angeles. (photo by Edwin Folven)

Hepatitis A is a liver disease contracted through fecal-oral transmission. To be infected, a person must physically ingest contaminated fecal matter. Those most at risk for hepatitis A are homeless individuals, illicit drug users, and people who have traveled to countries where the disease is more prevalent, including all Central and South American countries, and the islands of the Caribbean.

Dr. Jonathan Grein, head epidemiologist at Cedars-Sinai Medical Center, said, the symptoms can range from “minimal” to “abrupt.” Often those infected experience fever, fatigue, abdominal discomfort and nausea. The disease can also cause a yellowing of the skin, dark urine and pale stools. Typically, the symptoms last for one to two months – but they don’t always show up immediately after someone has come into contact with the virus.

“It’s generally stated that the incubation period – that time from exposure to symptoms – is about 28 days, but it can range anywhere from about two weeks to up to 50 days,” Grein said.

There is no specific treatment other than basic supportive care offered in hospitals. However, the majority of those who come into contact with the virus survive without any complications. But for those with underlying liver issues, including hepatitis B or C, hepatitis A could be deadly, especially without medical assistance.

When L.A. first declared the outbreak in mid-September, the county reported 10 confirmed cases of hepatitis A. A month later, that number has grown to 13. Hoping to prevent the spread of the virus, the county looks to prevention through vaccination as its main course of action, according to the DPH.

“The vaccine for this virus is very effective. Even after one dose it’s estimated that more than 95 percent of people will be protected. The general recommendation is two doses, to make sure that number is as close to 100 percent as possible,” Grein said. “Vaccination clearly is the appropriate approach to this outbreak.”

At Cedars-Sinai, doctors and administrators look to primarily “reinforce the public health recommendations” offering vaccines, as well as raising awareness among clinicians on how to recognize the disease and to report any cases to the DPH.

The DPH has teamed up with Los Angeles Homeless Services Authority to vaccinate to as many people as possible.

“Homeless people are disproportionately impacted by the hepatitis A outbreak, so we’ve been working really closely with the Department of Public Health, who is really spearheading all the work around this to try to merge the two systems,” said LAHSA Outreach Coordinator Colleen Murphy. “They have the vaccine, we have the knowledge of who is on the streets, how to best communicate with them, and the boots on the ground to [take action].”

Even before the outbreak was declared in L.A., DPH and LAHSA quickly got to work after seeing the outbreak in San Diego rapidly escalate. As Murphy noted, “we really wanted to get on top of this as early as possible.” She described LAHSA and DPH’s approach as “holistic,” with efforts being made in shelters and on the streets with outreach coordinators in each region of the county working alongside nurses to vaccinate homeless individuals.

But beyond vaccines, LAHSA is also working with DPH’s Environmental Health unit on improving sanitary conditions for the homeless to limit the spread of hepatitis A. For instance, LAHSA hands out hygiene kits filled with supplies such as soap and hand wipes, as well as information on the virus and how to prevent transmission. The organization is also working with the DPH to determine long-term solutions, such as increasing the hours of public bathrooms and installing more hand-washing facilities.

While currently LAHSA has a weekly call with DPH, the outreach coordinator explained that such collaboration and communication between the two groups, as well as other health service providers in the area, was not always in place.

“Doing this five years ago would have been a very different story,” Murphy said. “It’s a big task – we’re a very big county with over 50,000 people who are homeless, but we have done a lot of work these past few years to coordinate all the various service providers and to be really strategic and work better together.”

With the numbers of hepatitis cases still quite low in L.A. – especially compared to San Diego and Santa Cruz – it appears that the combined approach between LAHSA and DPH is working. However, Murphy could not specifically identify why such a disparity exists between the regions.

“When anything takes hold, it can spread – just like the wildfires up north,” she said. “We are just trying to stop [hepatitis A] in its tracks before it takes hold.”

The 13th district, which covers parts of Hollywood, Silver Lake, Echo Park and Atwater Village, ranks the third highest in most homeless individuals. In order to fight the hepatitis A outbreak in the area, Councilman Mitch O’Farrell, has teamed up with LAHSA to reach the district’s most vulnerable constituents. He has also set up regular cleanups around encampments, including steam-cleaning the sidewalks. He said he was happy to hear that the county was putting in such a large effort to vaccinate as many homeless individuals as possible.

“I believe a countywide approach to this outbreak is necessary,” O’Farrell said. “And I’m glad our numbers are far below those of San Diego’s, where there have been multiple deaths as well.”

However, the councilman felt in addressing the hepatitis outbreak, it was also important to address another epidemic hitting the U.S. – the opioid crisis.

“There is a direct correlation between access to opioids and homelessness which we really need to address,” O’Farrell said.