The celebration took place at the beginning of the council’s Oct. 13 meeting. 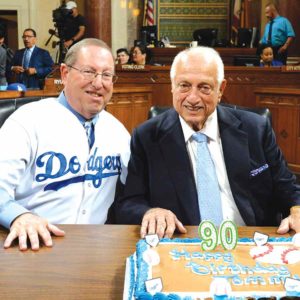 For more than three decades, Lasorda has been the face of the Los Angeles Dodgers. He managed the team from 1976-1996, and was inducted into the National Baseball Hall of Fame in 1997 by the Veterans Committee following a career in which he won 1,599 games, two World Series and two more National League pennants – all with the Dodgers.

“We are delighted to recognize Tommy Lasorda for his significant contributions and wish him the happiest of birthdays,” said Councilman Paul Koretz, 5th District. “Tommy Lasorda has been a champion with the Dodgers and for the city of Los Angeles. He is regarded by many as baseball’s most popular ambassador not only in the U.S. but around the world. As a lifelong Dodgers fan it is my honor to invite him to Los Angeles City Hall and allow us to share in his 90th birthday celebration.”