Two students from each grade level will be announced as the high school’s Homecoming Royalty at halftime of the school’s Oct. 20 football game, regardless of gender and without the traditional king and queen labels for the top vote-getting seniors. 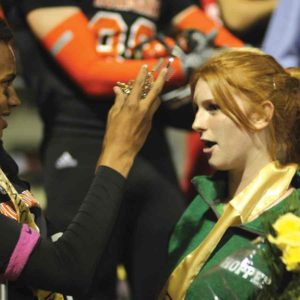 Beverly Hills High School has traditionally had ballots with four girls and four boys for each grade level. Members of each class voted for their grade’s candidates, with the winners crowned prince and princess. The whole school voted for king and queen from a pool of four senior boys and four senior girls.

“I would like to say that I believe the most important aspect of a young person’s life is to feel loved, to feel included, to feel accepted, and to feel like they belong in this place we call school where too many just go through the motions of the day, dreaming of the moment they can leave,” Jennifer Goolsby, a math teacher at the high school, said.

She also advises the school’s Associated Student Body, which contributes to the production of school events such as homecoming.

“I do know that this is a rather abrupt change to a very established tradition, but I believe the importance of inclusion outweighs the value of this particular tradition,” she added.

The movement toward gender-neutral homecoming ceremonies has grown stronger at high schools and colleges across the U.S. Some of them have taken the opportunity to abandon the royalty motif. Last year, the University of Wisconsin-Stout, for example, began a homecoming tradition of selecting eight students as Stout Ambassadors Spirit Award winners instead of a king and queen.

Sarabeth Tansey, a Beverly Hills High School senior, said last year’s homecoming ceremony inspired the switch. A junior transgender student was one of the winners of the homecoming vote, underscoring the need to accommodate shifting gender norms in school events.

Some of the district’s teachers were resistant to discontinuing the crowning of a king and queen, Tansey said, but there’s also been plenty of support.

“For the most part, I think students are OK with it,” she said, a sentiment echoed by the school’s student representative on the Board of Education.

“One thing we really wanted to focus on here [is] looking to be progressive, looking to be inclusive and diverse for all students, regardless of how they identify themselves,” said Jonathan Artal, a Beverly Hills High School senior, during the Sept. 26 Board of Education meeting. “If you’re elected to homecoming court, it won’t be because you’re just a boy or just a girl, it’s because you can define yourself however you choose to.”

Vote early and often for the Formosa Cafe