Pending the passage of a city ordinance, elections for Beverly Hills City Council will be held in March of even-numbered years, starting in 2020. All council members would have one year added to their terms.

The council has to approve a switch to elections on even-numbered years to comply with SB 415, a voter participation law passed in 2015. All locally elected bodies in California that hold elections on odd-numbered years are required to change their cycles to coincide with statewide elections if they do not meet a minimum voter turnout threshold. 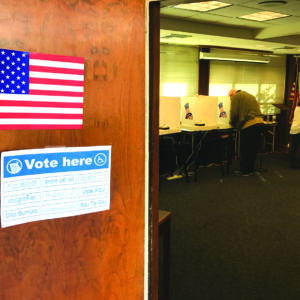 Voters throughout Beverly Hills will soon show up at their polling places, such as the one near the school district’s superintendent’s office (pictured), only during even-numbered years as the result of new state legislation. (photo by Luke Harold)

At its study session on Tuesday, the City Council directed the city attorney to draft an ordinance specifying the new election schedule. If passed, the scheduled March 2019 election would be postponed to March 2020, adding a fifth year to the terms of Mayor Lili Bosse and Vice Mayor Julian Gold. Both were first elected in 2011. The City Council passed a resolution in December 2014 appointing them to second terms. Because they were the only two eligible candidates in a two-seat election, the March 2015 City Council election was cancelled.

Councilmen John Mirisch, Les Friedman and Robert Wunderlich, elected to their current terms last March, will serve until 2022 instead of 2021. Mirisch is in his third term, and Friedman and Wunderlich were first elected this year.

Gov. Jerry Brown recently signed SB 568, moving California’s statewide primary elections from June to March beginning in 2019. The law is designed to give California’s primary elections greater influence in presidential politics. It also means local elections throughout the state can be held in March, instead of June, or November of even-numbered years.

“It focuses on the local politics,” Friedman said. “It’s not overtaken by the statewide or the national elections.”

“Voter turnout is not the be all and end all,” he said, adding that it’s “not too much in a democracy” to ask voters to participate in local elections on odd-numbered years.

To be exempt from consolidating election cycles with statewide elections, locally elected bodies have to have voter turnout within 25 percent of statewide election turnout. In Beverly Hills, the average turnout in the last four statewide elections was 60.4 percent, according to a city staff report. But only 24.6 percent of voters participated in the 2017 City Council election, approximately 20 percentage points less than what the city needed to avoid the state’s definition of a “significant decrease in voter turnout.”

The Beverly Hills Unified School District’s Board of Education voted 3-2 in February to switch its election cycle to November of even-numbered years beginning in 2018. The switch added a year to all five members’ terms.

Residents showed up to school board meetings and wrote letters mostly in opposition to board members choosing a consolidation option that added an extra year to their terms. Another option would have preserved or reduced terms of sitting school board members, and allowed voters to decide who would serve one-time extended terms.

“You’re a great council,” said Judie Fenton, whose late husband Frank served Beverly Hills as a mayor, school board member and treasurer. She served as Friedman’s campaign manager leading up to his second-place finish in the three-seat council race this year.

“We’re really proud of you,” Fenton continued. “To do anything else would rob our community.”

The deadline for each “political subdivision” to approve the change is Jan. 1, and they have to make the switch no later than the November 2022 election.

Dive into fall fun at the Farmers Market