The Los Angeles Philharmonic’s 2017/18 organ recital series at Walt Disney Concert Hall features the venue debut of Jean-Baptiste Robin, organist of the Royal Chapel at the Palace of Versailles, on Sunday, Oct. 8 at 7:30 p.m. 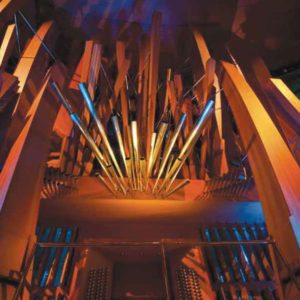 The Walt Disney Concert Hall Organ was recently featured in an exclusive Facebook Live performance and interview with Grammy-winning organist Paul Jacobs. The upcoming series also includes a performance on Jan. 21 by Katelyn Emerson, winner of the American Guild of Organists 2016 National Young Artists Competition; Wanamaker Grand Court Organist Peter Richard Conte, who will be joined by flugelhornist Andrew Ennis on Feb. 18; and Argentinian organist Hector Olivera, on May 20.

Inaugurated in 2004, the organ’s visual design was a collaboration between Frank Gehry and organ builder Manuel Rosales. Affectionately called “Hurricane Mama,” the organ was so named by musical visionary Terry Riley after a night of improvising.

The specially curved wood façade pipes are actual playing pipes that were made by Glatter-Götz Orgelbau in Germany and consist of the violone and bassoon basses. Behind the façade are three levels of pipes, including metal pipes made of tin and lead alloys, and wood pipes made of Norwegian pine.