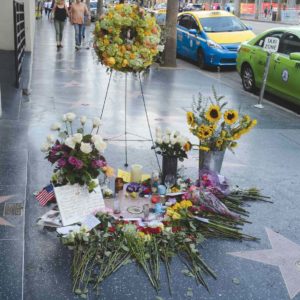 Tony Dimitriades, longtime manager of Tom Petty & The Heartbreakers, confirmed the singer’s death in a written statement on Twitter. “On behalf of the Tom Petty family, we are devastated to announce the untimely death of our father, husband, brother, leader and friend, Tom Petty,” he said. “He suffered cardiac arrest at his home in Malibu in the early hours of this morning and was taken to UCLA Medical Center but could not be revived. He died peacefully at 8:40 p.m. PST, surrounded by family, his bandmates, and friends.”

Highlights of Petty’s music career include his platinum-selling album “Damn the Torpedoes,” which featured the singles “Don’t Do Me Like That,” “Here Comes My Girl” and “Refugee.”

The Hollywood Historic Trust placed flowers on Petty’s star, located in front of the Roosevelt Hotel at 7000 Hollywood Blvd.