Hugh Hefner remembered on the Walk of Fame 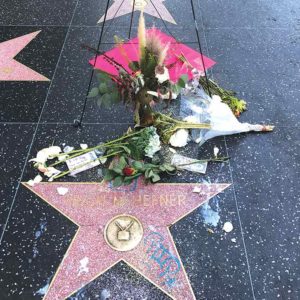 Hefner published the first issue of Playboy Magazine with $8,000 from more than 40 investors, including his mother. He became a champion of free speech and liberation, and eventually a target for criticism as the women’s rights movement entered the mainstream.

Hefner planned to be cremated and for his ashes to be interred in the crypt next to Marilyn Monroe, the first Playboy cover model, at Westwood Memorial Park in Los Angeles.

The Hollywood Historic Trust placed flowers on Hefner’s star, located in front of the Roosevelt Hotel at 7000 Hollywood Blvd.