The Paley Center for Media will celebrate the women behind some of television’s most unforgettable moments Oct. 12 at a Beverly Hills gala. 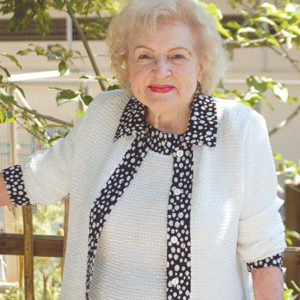 Betty White will receive an award at “Paley Honors in Hollywood: A Gala Celebrating Women.” (photo by Edwin Folven)

“Paley Honors in Hollywood: A Gala Celebrating Women in Television” will be the first of its kind to celebrate eight decades of groundbreaking accomplishments of women across a variety of genres.

Rounding out this unforgettable evening will be a tribute to beloved TV icon Betty White, featuring a look at her incomparable career on television as an actress, entertainer and producer.

“I am thrilled to be honored by the Paley Center,” White said. “To be acknowledged for working in a business I love for as long as I have is truly a privilege. I’m proud to share this evening with these amazing and talented women.”

“The Paley Center is so proud to honor this incredible group of women at this once-in-a-lifetime event,” said Maureen J. Reidy, Paley Center president and CEO. “No other medium has brought people together the way television has, and this is the perfect time to celebrate the pioneering entertainers, groundbreaking series and current hit shows that have sparked conversations, educated audiences, and thrilled generations.”

The gala benefits the Paley Center’s programs and its ongoing efforts to expand and preserve the Paley Archive, which includes the Women’s Collection. Featuring more than 160,000 programs, the Paley Archive is the nation’s largest publicly accessible archive of television and radio programs from more than 70 countries, spanning almost 100 years.

“The Paley Honors in Hollywood: A Gala Celebrating Women in Television” is scheduled for 6:30 p.m. Oct. 12 at the Regent Beverly Wilshire Hotel, 9500 Wilshire Blvd. For more information, visit paley.me/lahonors2017.