Wolf: For a howling good time

Have you noticed there are quite a few of Bravo’s “Top Chef” contestants working and opening restaurants in Los Angeles? I always have high expectations walking into one of these restaurants because the chefs were cast for their talent, creativity and personality. 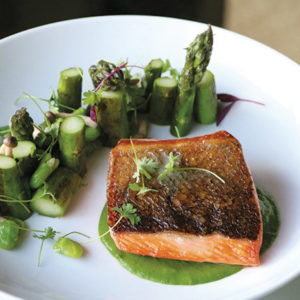 The King salmon with crispy skin is beautifully plated with lima beans and asparagus. (photo courtesy of Wolf)

When I heard Marcel Vigneron from “Top Chef,” second season, opened his first restaurant, Wolf, on Melrose Avenue, I was eager to see what this chef was offering.

I researched the restaurant beforehand and discovered Vigneron is from Bainbridge Island and named Wolf after his mother’s maiden name. He attended the Culinary Institute of America in New York and worked with esteemed chefs Joël Robuchon and Michael Mina. Once in Los Angeles, he worked under Executive Chef José Andrés as the executive sous chef of The Bazaar at the SLS Hotel in Beverly Hills.

Making a handful of television appearances including “The Next Iron Chef: Redemption” and “Cutthroat Kitchen,” Vigneron is a local celebrity.

He took over the ROFL Cafe space on Melrose and redecorated it with the help of Christina Rottman Designs from Santa Barbara. In the front are two tables set for four guests, and a small outdoor lounge area.

The focal point of the warm and comfortable dining room is the pickled wood plank ceiling, which makes you feel like you’re aboard an ark. Two wagon wheel-sized light fixtures hang down holding multiple Edison lights illuminating the dark room. Distressed walls and concrete flooring dotted with circular stains give the room character. A comfortable banquette covered in soft blue velvet sits behind wood tables and chairs. The tables are set with pretty, unmatched silverware, and a small and simple votive candle as a centerpiece. The simplicity allows Chef Vigneron’s dishes to be the visual eye candy.

I chatted with the chef and mentioned the interesting shaped mirror.

“The frame is teak wood from Costa Rica. I like the mirror-on-mirror funhouse effect,” Vigneron said. 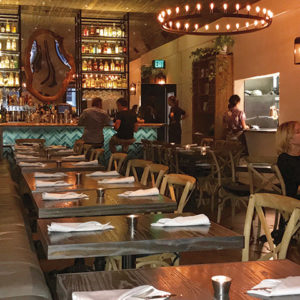 The interior at Wolf combines rustic wood with edgy tile, making for a very pleasing environment. (photo by Jill Weinlein)

The one-page menu is titled “Week 80,” since the restaurant opened in March 2016, about 80 weeks ago. Looking over this week’s menu, I thought the food items were reasonably priced for the quality and intriguing preparation of the creative dishes.

Our server Noah recommended some of his favorite starters. The tomato soup served with cornbread was comforting, made with freshly harvested tomatoes just plucked off the vine and a touch of heat.

My husband ordered the local hiramasa served ceviche style. The yellowtail had mild, buttery flavors that the chef enhanced with a macadamia nut tahini and served with curled, dark green nori rice crackers. What makes this dish even more spectacular is that it arrives on a plate with a covered dome. As the lid is lifted, a pleasing, smoky aroma escaped.

When the Let The Beet Drop salad arrived at the table next to us, we were intrigued with the presentation. A strategic splattering of dark red beet juice on the plate with a variety of pickled and steamed beets nested together in the shape of a crescent moon. We had to experience this dish which had citrus yuzu juice drizzled over the beets, berries and a sprinkling of sliced almonds. Vigneron uses a bit of molecular gastronomy by freezing beets with liquid nitrogen to give guests a “dragon’s breath” experience.

Wooden handle steak knives were delivered with our thick, short rib steak entrée. The meat rested on an espresso and potato puree and was topped with a peppercorn glaze, of which I wanted more. The soft, grilled endive that accompanied this dish was surprisingly good.

My favorite offering was the perfectly cooked King salmon with crispy skin served with a generous helping of fresh corn and lima bean succotash. Tiny sun gold tomatoes rolled around the plate near a side of green beans and slightly blistered padron peppers, also known as shishito peppers without the heat.

Chef Vigneron’s examines each dish before servers deliver each them to guests, and adds his personal touch to make sure it’s perfect.

Not wanting this fun to end, I ordered the Eton Mess that arrived as a large island of meringue, surrounded by sliced black figs, black tea ice cream and vanilla whip. The black tea ice cream was a nice touch to this popular British dessert. We also split a piping hot espresso souffle with a scoop of vanilla ice cream. It arrived puffed high, yet immediately deflated when our server punctured the center to place ice cream inside.

‘Battle of the Sexes’ serves up great cultural commentary